Senator Buruji Kashamu told me he was going to Die, he was fully Prepared: Bakare 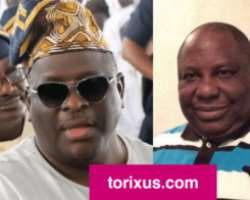 Aare Remi Bakare, One of the closest politician to late Senator Buruji Kashamu till the time of his death, has served a note on why the death of his close friend didn't came as a bizarre occurrence to him.

Bakare was the Head of the Campaign Team of Buruji Kashamu Organisation. Both are very close friends who have the tenacity of purpose and they are dogged in their pursuit of what they believe in.

Based on the report we have, Bakare was one of the few persons who engaged Buruji in a long interesting conversation before his last breath on Earth.

Also, Torixus was told that he was one of those Buruji Kashamu gave specific instructions on what to do before and when he is gone. He also told him about the future of Ogun PDP and what his faction should do when he is no more.

On Thursday last week, City people matter-of-factly interviewed Bakare, who disclosed to the media that the deceased told him on several discussions that he was going to die, and that he was fully prepared before death knocked.

When asked, how he took the news of Buruji's death. He said, “It came as a rude shock, “he replied. “But the fact that he had been warning me of his impending exit reduced the severity of the shock. Kashamu happened to be someone who I would say had an uncommon grace in the sense that he knew he would go and he had informed me days before. So, as a result, it wasn't much of a shock, though one would have loved to have him around. For the next 3 to 4 decades, but he was prepared for his death.

“The first time he told me, it was on the phone. He called me and said Remi, look, I am leaving you people. And he said these are the things I want you to do. And he told him to keep quiet. Don't say such a thing like that again. I told him. Don't worry, God is in control, bla, bla, bla. And then he called again. He called me several times on his sickbed. Every time he called me while, on the sickbed, he kept saying to me, Look, Remi, I am leaving you. And I kept on assuring him, look, you are not going anywhere. And the last time he called me, he said, Remi, call my lawyer. I want you and my lawyer to go and see OGD, and he gave us instructions on what to do and he said “this is likely going to be the last time that I will be speaking with you. And I said, look…And he said Remi, listen to me and do exactly what I asked you to do. A few hours after, he went into a coma. To God Be The Glory.” he said.