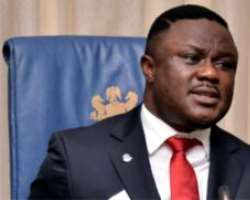 Cross River Government says it has successfully executed 838 micro projects in the state through the Community and Social Development Project (CSDP) between 2009 till date.

CSDP project is being implemented in collaboration between the state government and the World Bank.

Gov. Ben Ayade of Cross River disclosed this in Calabar during a one day workshop on presentation of CSDP outcome evaluation result to stakeholders in Cross River.

Ayade, who was represented by Dr Inyang Asibong, Commissioner for International Development Cooperation, said the CSDP has been the lead agency in rural development in the state.

Ayade said that his administration was focused on industrialisation, hence the need to provide micro projects and critical infrastructure for rural dwellers in the state.

According to him, the micro projects were executed in over 300 communities across the 18 local government areas of the state.

He mentioned the areas of intervention to include provision of water, healthcare centres, education, rural electrification, socio-economic, environment, transport and community housing.

“We believe that if these projects are sustained, the industrialisation agenda of this administration will be achieved.

“Cross River as a state is committed to sustaining the gains of the project because it is meant to improve social and natural resources infrastructure services in a sustainable manner,” he said.

Speaking, Mr Fidel Udie, the Acting General Manager of Cross River Committee and Social Development Agency, explained that the workshop was to ascertain the outcome of benefitting communities over the years through the CSDP project.

Udie explained that the vision of the agency was “to be an agency championing sustainable infrastructural development of poor communities and vulnerable groups in the state”.

On his part, the Chairman of Board of the Agency, Mr Tony Ikpeme, said that the workshop was to help them assess the beauty of the impact of infrastructure carried out across the state.

Ikpeme, who disclosed that the project will have new phases going forward, said that the rural dwellers were the direct beneficiaries of the projects.

In his goodwill message, Mr Fabowale Gbadebo, the Head of Operations, Federal Project Support of CSDP, commended the state government for sustaining the execution of the projects to improve the social economic and health status of rural dwellers.(NAN)