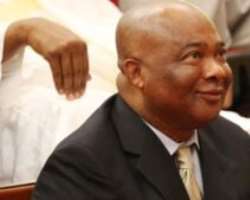 Imo State Governor, Hope Uzodimm, does not want the tag 'Supreme Court governor' used to describe him by the People's Democratic Party.

And he is determined to ensure that pejorative epithet is done away with.

For this Purpose, the governor who won a surprising victory at the Supreme Court and replaced Emeka Ihedioha as the state's governor, has petitioned the National Judicial Council (NJC) and Abubakar Malami, attorney-general of the federation asking that the use of the tag be stopped.

The Supreme ruled in January that Uzodinma was the duly elected governor of the state.

The court had ruled that Uzodinma who was fourth as per the number of votes validated by the Independent National Electoral Commission was winner of Imo governorship election on the premise that results from 388 polling units by INEC in the results declared by the umpire during 2019 March election.

In the petition, Special adviser to Uzodinma on political matters,Batos Chikezie is asking that Ogubundu Nwadike, the publicity secretary for PDP in the state, and other loyalists be stopped from using the “supreme court governor” tag as it is derogatory and misleading.

“Nwadike (has) continued to refer to Uzodinma as the Supreme Court governor and Chief Emeka Ihedioha as the elected governor of the state in the print, electronic and social media,” Chikezie said.

His plea is that the NJC through the registrar of the Supreme Court should ensure that Nwadike was made to stand trial for “persistently making a mockery of the decision and proceeding of the court on the Imo State election, thereby making them look compromised and biased in the eyes of the public which is a dent on their integrity and pedigree.”