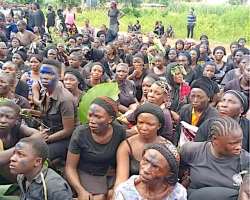 Wednesday, 5th August 2020, Intersociety, Onitsha, Eastern Nigeria: Int’l Society for Civil Liberties & Rule of Law is continuously alarmed over ceaseless and untamed massacre of Christians in Nigeria or any part thereof and the lackadaisical attitude and strongly suspected complicity of the present central Government and its security forces. It is specifically shocking that in the past seven months of 2020 or 1stJan to 31st July 2020, no fewer than 1,421 Christians have been hacked to death, out of which Jihadist Fulani Herdsmen accounted for 1,027 deaths, Jihadist Boko Haram and ISWAP over 310 deaths and Jihadist Ansaru and Jihadist “Bandits” over 60. The total Christian deaths of 1,421 included “24 dark figures”.

The above was also the summary of three letters we wrote differently and electronically submitted to the Secretary General of UN, Antonio Guterres, Commonwealth Secretary General, Rt. Hon Patricia Scotland (QC) and Chief Prosecutor of ICC, Ms Fatou Bensouda on one part; and US Secretary of State, Mike Pompeo, His Holiness Pope Francis and the High Commissioners/Ambassadors of Australia, Canada, Israel, Norway, United Kingdom, Switzerland and Ireland on the other. The third letter was also jointly and separately sent to the European Union Delegation to Nigeria and ECOWAS and Ambassadors of the following EU Member-States: Netherlands, Finland, Poland, Germany, France, Czech Republic, Italy, Belgium, Denmark, Spain, Portugal, Greece, Hungary, Bulgaria, Slovakia, Austria and Sweden.

In our letter to the UN Secretary General, the Commonwealth Secretary General and the Chief Prosecutor of ICC, they were reminded that it will be gravely calamitous to sit and watch by and allow Nigeria, a country of multi-ethnicity and multi-religions with explosive population of over 200m people; to explode into ‘complex humanitarian emergencies’; incapable of being managed if allowed to explode. Calling for their immediate intervention to save Nigerian Christians and exert pressure on Nigerian authorities to respect and enforce rights to life and religious freedoms; the ICC Prosecutor was specifically called upon to break the Int’l Criminal Court’s long years of silence and inaction regarding the ongoing butcheries in Nigeria including its long delays to do the needful in since 2010 when it claimed to have “opened investigations on Nigeria”.

The Secretary General of Commonwealth, Rt. Hon Patricia Scotland was reminded about the Harare Commonwealth Declaration(1991) which affirmed that human rights are among the fundamental political values of the Commonwealth and that the Commonwealth Charter, agreed to by the Commonwealth’s Heads of Government in 2012 also underscores the commitment of Member States to Commonwealth principles and values inclusive of human rights. For US Secretary of State and His Holiness Pope Francis and High Commissioners/Ambassadors of EU, Canada, Australia, UK, Brazil, Israel and others, our letter called on them to intervene including launching their own investigations into the anti Christian butcheries in Nigeria or any part thereof and ascertaining roles played and still being played in the butcheries by the present Government of Nigeria; all for purposes of incorporating their findings into their general and specific relationships with Government of Nigeria particularly in the areas of development and humanitarian assistance, military aids and supplies, economic and diplomatic relationships or actions.

State-by-State Breakdown Of The Jihadist Herdsmen Killings In Jan-July 2020: Our detailed statistics showed that in the past seven months of 2020 or 1st January to 31stJuly 2020, Southern Kaduna recorded the highest number of Christian deaths in the hands of Jihadist Fulani Herdsmen with 363 Christian lives, followed by Plateau State with 158 deaths, Benue 152 deaths, Kogi 54, Adamawa 40, Nasarawa 40, Taraba 32, Niger State 30, Igbo Land including Igbo-Delta and Igbo-Benue 30 deaths, non Igbo-Delta 20 deaths, Edo 10 and Southwest particularly Ondo and Oyo 20 Christians deaths and others 11; totaling 1,027 Christian deaths in seven months or Jan-July 2020.

394 Christians Killed By BH, ISWAP & Other Jihadists In Jan-July 2020: No fewer than 394 defenseless Christians were killed in Northeast, Northwest and North-central Nigeria from Jan-July 2020 by Boko Haram and ISWAP jihad terrorists as well Ansaru terror group and Jihadist “Bandits”. By our report of 12th July 2020, not less than 350 Christians were hacked to death by the named Jihadist groups from 1stJan to 10th July 2020”. Boko Haram and ISWAP had accounted for no fewer than 300 Christian deaths out of over 600 killed. Between 12th to 31st July, over ten more Christian deaths were recorded by the duo including five aid workers publicly executed by ISWAP on 22nd July 2020. While BH and ISWAP killings including massacre of defenseless Christians had majorly taken place in Borno, Taraba and Adamawa States, the killings and abductions by Jihadist “Bandits” and Ansaru have particularly affected the Christian parts of Northwest and North-Central Regions including Kaduna in the North-West and Kogi, Nasarawa and Niger States in the North-Central; leading to their responsibility for over 60 Christian deaths in seven months.

Southern Kaduna has lost no fewer than 363 defenseless Christians in seven months of 2020 or 1st Jan to 31st July, 2020. Out of this figure, Adara Community and environs in Kajuru Local Government Area was visited with 164 Christian deaths while remaining parts of Southern Kaduna recorded 199 Christian deaths. Not less than 175 Christian lives were also lost to Jihadist Fulani Herdsmen in Southern Kaduna in the month of July 2020.

The 175 deaths in July included the feared killing in the Jihadist Fulani Herdsmen custody or captivity, of the 32 abducted Christians who were abducted and disappeared till date by the invading Jihadist Fulani Herdsmen on 16thJuly 2020 in Mai-ido and other neighboring villages in Kachia Local Government Area of Kaduna State. Names of the four defenseless Christians slaughtered on the spot during the attack were: Samaila Bulus, Danjuma Bala, Christopher Bawa Ayuba and Sunday Rabo Barga. The loss of 175 Christian lives in one month in Southern Kaduna is the highest in the State since Oct 2016.

Eight Major Indicators Linking The Nigerian Central Government To Fulani & Boko Haram Jihadism: One of the eight major indicators vicariously or directly linking the present central Government of Nigeria to Fulani and Boko Haram Jihadism in Nigeria or any part thereof is the chronically asymmetric composition of the country’s security and defense establishments particularly their commands and controls which are now, some say, “90% Muslim controlled or dominated”. Such gross lopsided composition or near total domination of same by Muslims have been fueling the anti Christian butcheries in the country or any part thereof including Southern Kaduna; leading to ‘brothers at Jihad’ solidarity and practice among the drafted security personnel and their superior dominated and controlled by Muslims.

For deeper reading and analysis of this report, the link to our investigated data sources is here: http://intersociety-ng.org/phocadownload/2019/file%20containing%20statistical%20sources2-converted%20new.pdf