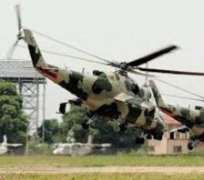 The Chief of Air Staff (CAS), Air Marshal Sadique Abubakar has tasked troops to sustain the tempo of operations against the Boko Haram terrorists in the northeast.

Represented by AVM Isiaka Amawo, the Chief of Policy and Plans, NAF Headquarters, Abubakar urged the troops to maintain high level of alertness and combat readiness.

He said that he was in Maiduguri to celebrate with the troop at the front line to boost their morale and foster comradeship.

“The essence was to also fill in the gap created for those of us that are in the front line and did not have the opportunity to celebrate with our families, to enable them have a sense of belonging during Eid-el-Kabir festivities.

“I commend the ATF Commander for his efforts in ensuring that the activities of the unit in the northeast are running smoothly and the tempo of the operation is being maintained.

“On the general note, I wish to thank you all for all your contributions in the successes recorded in the operations.

“However, we are all aware that too much is as stake for us in this war. As such, we cannot allow our selves to be taken unaware.

“I wish to remind you all that we are still at the frontline so we should not loose sight to the fact that we could come under attack at anytime.So let us continue to maintain vigilance,” he said.

He said: “We can only show appreciation for the President support by redoubling our efforts and also remaining as a discipline force.

“We are expected to exhibit a high level of professionalism in all our actions.”

The CAS enjoined the personnel to maintain vigilance and combat readiness to guarantee the security of the people during festive period.

Also speaking, the ATF Commander, AVM Precious Amadi, lauded the CAS for his commitment to the welfare of troops and execution of viable projects in the command.

Amadi noted that the gesture would go a long way to motivate the troops.

“Your presence was not only a source of motivation but also a strong indication of your commitment to the welfare and morale of the personnel at ATF Command, Maiduguri.

“We shall replicate the gestures by remaining focus, committed and highly professional in the execution of air power in support of the counter insurgency campaign in the northeast,” Amadi said.(NAN)