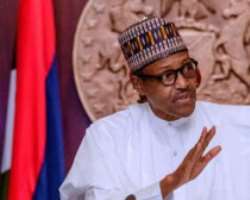 President Muhammadu Buhari has distanced himself from the views canvassed by his nephew and close confidant Mamman Daura about zoning of the post of presidency in the country.

The Senior Special Assistant to the President (Media & Publicity), Garba Shehu, said in a statement on Saturday that the views Mr Daura expressed during the interview with the BBC Hausa Service were “personal to him.”

Shehu said that Daura’s position does not “in any way” reflect the views of President Muhammadu Buhari.

“We have received numerous requests for comments on the interview granted by Malam Mamman Daura, President Muhammadu Buhari's nephew to the BBC Hausa Service,” the spokesman said..

“It is important that we state from the onset that as mentioned by the interviewee, the views expressed were personal to him and did not, in any way, reflect that of either the President or his administration.”

In the interview, which aired during the week, Mr Daura had in the interview said that it was Nigeria discarded rotational leadership, saying that it had failed the country. He did not however say how.

In his view, the country needs to look for the most competent and not for someone who comes from somewhere.

His view was swiftly condemned by various socio-cultural groups, including Ohanaeze Ndigbo and Afenifere, in the country who saw it as kite flying preparatory to perceived Northern agenda to retain the presidency in the North after Buhari’s second term.

According Garuba in the statement, “At age 80, and having served as editor and managing director of one of this country's most influential newspapers, the New Nigerian, certainly, Malam Mamman qualifies as an elder statesman with a national duty to hold perspectives and disseminate them as guaranteed under our constitution and laws of the land. He does not need the permission or clearance of anyone to exercise this right,” the Presidency's statement continued.

“In an attempt to circulate the content of the interview to a wider audience, the English translation clearly did no justice to the interview, which was granted in Hausa, and as a result, the context was mixed up and new meanings were introduced and/or not properly articulated.

“The issues discussed during the interview, centered around themes on how the country could birth an appropriate process of political dialogue, leading to an evaluation, assessment, and a democratic outcome that would serve the best interest of the average Nigerian irrespective of where they come from.

“These issues remain at the heart of our evolving and young democracy, and as a veteran journalist, scholar and statesman, Malam Mamman has seen enough to add his voice to those of many other participants.”

In Nigeria, the post of Presidency has rotated between North and South since the return of democracy in the country in 1999 and has helped in sustaining stability in the political system.