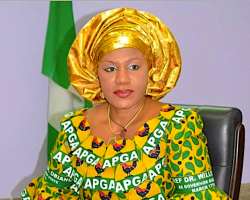 Wife of the Governor of Anambra State and founder of the Non-Governmental Organization, Caring Family Enhancement Initiative, CAFE, Dr. (Mrs.) Ebelechukwu Obiano (Osodieme) has called for collective effort in the push to achieve the global set breastfeeding standards, especially in the rural areas.

Dr. (Mrs.) Obiano made the appeal while delivering a goodwill message in Awka to commemorate World Breastfeeding Week which runs from 1 - 7 August, 2020.

Mrs. Obiano drew a distinct line between the current global pandemic and the statistical shortfall of active breastfeeding cases in most states in Nigeria, and called on parents, community and local government leaders to join in the renewed fight to checkmate the ugly trend across all societal levels.

Highlighting the theme of this celebration which is "Supporting Breastfeeding for a Healthier Planet." Mrs. Obiano restated the World Health Organization (WHO), and the United Nations Children's Emergency Fund, (UNICEF) recommendations on early child initiation into breastfeeding within one hour of birth, with an immediate follow-up of six months up to two years of exclusive breast feeding practice. She urged mothers to adhere religiously to that health guideline by eating healthily to improve their breast milk nutrients.

According to Mrs. Obiano, it is crucial that mothers understand that babies who have been fed with appropriate amount of breast milk would have both mental and physical edge over their peers denied such privilege. She stressed that the campaign would not bear the desired results if all hands were not on deck to make it work. She praised the strategic approach to healthcare initiated by the Anambra State Government through the Anambra State Primary Healthcare Development Agency which targets comprehensive provision of mother and child healthcare.

The Governor's wife observed that the sixth anniversary of her NGO, CAFE, coincidentally falls on the first day of the campaign, and made a firm pledge to continue to stand at the frontline of humanity's common good, especially as it affects the indigent members of society. She stated that the cardinal principles of CAFE are built on unvarnished charity and compassion.

World Breastfeeding Week is an annual global campaign to promote the importance of quality and exclusive breastfeeding, and to educate mothers and fathers, and local Council officials on the need for appropriate breast feeding as pathway to sustainable food system and a healthy world.