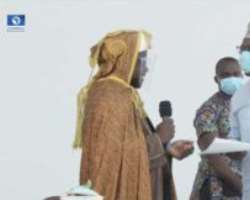 Ahead of the September 19 governorship election in Edo State, the Chief Imam of Benin City, Abdulfatah Enabulele has endorsed Governor Godwin Obaseki for the second term in office.

Accompanied by some other Muslim clerics, Enabulele said Governor Obaseki has won his way into the hearts of the people of the state since assuming office in 2016.

According to him, the administration of the Edo Governor has provided exemplary leadership to the people of the state.

“In less than four years in the life span of your administration, majority of those living in Edo State are very proud, happy and satisfied with the purposeful style of leadership Your Excellency has provided the good people of Edo State.

“Your administration has provided progressive, pragmatic and dynamic policies for the lives of millions of people positively across the state and beyond.

“Under your leadership, Edo people have witnessed absolute commitment, the sincerity of purpose, honesty, and respect for the rule of law, transparency, and accountability in practical terms in Edo State.

“Within four years, we saw a government that is responsible and responsive to the needs of the people. We have seen a government that will not make noise but wisely operate in a manner that could be described as 'the more you look, the less you see.”

The Imam, therefore, prayed for God's protection on the governor against what he describes as 'evil manipulations' involving the Devil and its agents. ChannelsTv