60 per cent of Democrats want Biden to pick a Black woman for vice president: poll 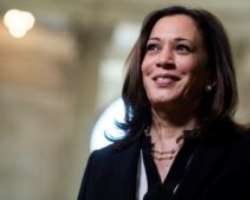 WASHINGTON — As presumptive Democratic nominee Joe Biden prepares to announce his vice presidential pick, a new Yahoo News/YouGov poll finds that a majority of Democrats believe he should tap a Black woman to join him on the ticket in November.

Biden, who promised that he would pick a woman to be his running mate during the Democratic primaries, has said he would reveal his decision in early August.

Sixty percent of Democrats think it's important for him to select a Black woman, though only 25 percent believe it's “very important” that he do so. Four Black women are on the vice presidential shortlist, according to Biden himself, though other prominent non-Black women of color remain competitive finalists.

Harris is the most popular pick overall among Democrats polled, with 33 percent saying they hope Biden picks her. The California senator was friends with Biden's late son, former Delaware Attorney General Beau Biden.

But some Biden backers are reportedly wary of Harris because of her stinging attacks on the former vice president in the first Democratic primary debate. Some of these Biden supporters also argue that Harris would be too ambitious to be satisfied with the often conciliatory role of VP.

Twenty percent of Democrats, meanwhile, say they want Sen. Elizabeth Warren to fill out the bottom of the ticket. The Massachusetts senator has emerged as a key policy adviser to Biden in the final months of the campaign but is a dark horse candidate for vice president, given her age and outspoken progressive beliefs.

Twelve percent of Democrats say they favor Rice, and 9 percent say they favor former Georgia gubernatorial candidate Stacey Abrams, another Black woman who has said she would accept the job. Another 6 percent say they want Biden to pick Illinois Sen. Tammy Duckworth, a combat veteran and woman of color, while 5 percent picked Michigan Gov. Gretchen Whitmer.

This breakdown mostly aligns with who the Democrats polled believe Biden will pick.

Regardless of her race, an overwhelming majority of Democratic respondents — 90 percent — think it's the “right decision” for Biden to pick a woman as a running mate. If the Democratic ticket wins in November, any woman Biden chooses will be well positioned to make a play for the presidency in 2024 or 2028.

While the Biden campaign attempts to peel off Republican voters, particularly those in swing states, only 5 percent of Trump supporters told Yahoo News/YouGov that Biden's vice presidential selection might convince them to vote for the Democrat