Deradicalising ex-Boko Haram members: What the Army is doing is acceptable to us 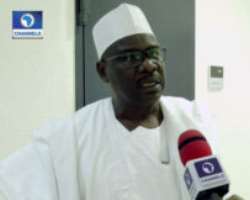 The Chairman, Senate Committee on Army, Senator Ali Ndume, has slammed the deradicalisation of ex-Boko Haram members by the Nigerian Army.

According to him, the Army is insensitive to the feelings and emotions of the families whose members were killed, many of whom have been displaced from their homes.

Ndume during an interview on Channels Television's Politics Today, described the action by the military authorities is a misplaced priority.

“This is a misplaced priority that is not supposed to happen now. It is okay to deradicalise but the timing is completely wrong.

“This is a situation where we still have over one million displaced persons in various camps and communities, they are still dealing with the trauma of the insurgency,” he said.

He wondered why the focus of the military is deradicalisaing the militants and sending them back to the people whom they had wrecked their lives.

The Borno-born senator asked why persons who committed crimes and not subjected to trials but just let off the hook just because they surrendered.

In his view, what the Army is doing is unconstitutional as falls short of the provisions for such programme. He did not rule out the option of a recourse to law court.

“What the Army is doing is totally unacceptable to us,” he said.

Ndume who represents Borno South Senatorial District in the National Assembly, thinks that Federal Government rehabilitate victims of the Boko Haram insurgency and not the ex-terrorists.

In doing this, he asked the Federal Government to give the Internally Displaced Persons scattered across the country start-up packs to begin a new life.

“If the government is serious about a programme like this, it should start with the victims first and not the perpetrators.

“I am in Maiduguri. The worst part of it is that those that have been so-called deradicalised are released into society. There is no monitoring device. One of them that came back killed his father and took away his two cows.”

The Rainbow with Channels report