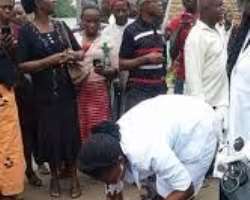 Four retirees slumped and were hospitalised on Tuesday in Imo State during a protest to demand for five months arrears of their pension allegedly owed them by the state government.

The News Agency of Nigeria reports that the incident happened at the protest scene around the Government House Roundabout in Owerri.

One of the retirees, who slumped, but was revived, Margret Onuoha, said she retired from the state civil service on Grade Level 14.

She claimed that her late husband, Eugene Onuoha, also a retiree, died in the struggle in 2016 and was never paid till date.

Onuoha said her heath condition had worsened in the last five months that she has not received her pension.

The retirees displayed placards with inscriptions: “We are not ghost retirees”, “Uzodimma is playing politics with our lives” and “Pay us our money now or face the wrath of God.”

Ohaneje said the protest was about the third the pensioners had embarked upon and accused the state government of ignoring the plight of the retirees.

“Government is owing us a total of 45 months pension arrears, but we are asking it to pay us five months arrears accumulated since March 2020,” he said.

The chairman said they embarked on the protest because the state government had alleged that they were ghost pensioners.

“Government has accused us of being ghost pensioners, but we have woken up from the grave to tell the government that we are not ghost retirees,” he said.

Addressing the retirees, the state Commissioner of Police, Issac Akinmoyede, appealed to the protesters to maintain peace and channel their grievances to the appropriate quarter.

Akinmoyede also assured that he would communicate their message to Governor Hope Uzodinma for action.