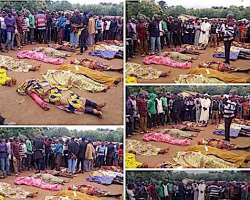 With reference to the 1999 Constitution of the FRN as amended, the primary responsibility of the government is the security of life and property of Nigerians. In contextual terms the word security comes with a lot of attributes which when breached could lead to an unending warfare visible and invisible. Part of these attributes is the welfare of the people. When this is not provided, a nation is at the risk of collapse.

The institution saddles this responsibility executive, legislative and the judiciary have failed in their responsibility of taking care of Nigerians welfare. Thus, managing the security crisis ravaging the country becomes a difficult task.

I feel so displeased like millions of Nigerians across the globe who hear and watch their kith and kin being slaughtered daily. We should not pretend not to know how we got to this level of insecurity. History has shown us how we politized security issues due to power struggle. How we underfunded our security sector for decades. How we refused to recruit able body men and women in all the security outfits. How we created hundreds of thousands of ghost security personnel to which salaries allowances and other bonuses are received by the few senior officers.

History will not be so kind to us because we brought unqualified men and women to manage our treasures, security system and other critical sectors in the name of federal character.

Have we forgotten how we created artificial poverty, how we deliberately refused to educate and enroll poor children in the modern educational system in the name of culture and religion. How we deliberately created ethno-religion politics to which its consequence we are suffering.

With the various security outfits comprise of Army, Navy, Air force, Police, NSCDC, Nigeria immigration, Custom Service, Office of the National Security Adviser, Department of state security service etc, Nigeria should have a sophisticated security architecture which should have the potential to defeat the insurgency but reverse is the case because of the internal and external divisions among the security agencies.

It is unfortunate that they never work as a team. Self ego, grand corruption, and lack of proper supervision by the Presidency and NASS has created a serious set back on their effective functioning.

Within the month of July alone, hundreds of innocent Nigerians have lost their lives. While the killers and their accomplices within the security agencies walk freely, victims die without justice. Villages, communities and local government areas taken over by bandits who rob, kill and maim without being checked.

We should begin to ask ourselves wherever we we are on what can we do to stop the series of killings in our dear country "Nigeria". This is our land we must make it better and secure for our kith and kin and unborn generation. No economy develop when the country is in the midst of war. No future for a country who is at war against itself. The current security situation was born out of the mistake of the past made by both the leaders and the followers by not uniting against a common enemy.

How to support the peace effort:
Pressurize your elective representatives, support and empower young men and women, engage in peace walks, generate public discussion in the media both traditional (radio, television, newspaper etc) and social media (facebook, twitter, instagram, whatsapp, etc.) frequently. The purpose is to make the government and other authorities concerned to act without delay.

As Nigerians we must do our part in whatever forms because only Nigerians knows where it pinches, and we must take the responsibility of finding solution to the killing. Let support the peace effort by being a peace builder rather than a peace destroyers in our various community. Let support the displaced group in the interest of peace.