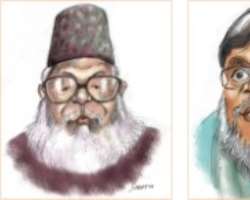 The Detective Branch arrested Nizami at the National Press Club about 5:00 pm when he came out after attending a program. Moulana Delwar Hussain Saydee was arrested at his house at Shahidbagh area in Dhaka in the city at 5:15 pm.

The police picked Ali Ahsan Mohammad Mojaheed up in front of the National Martyrs' Memorial at Savar, on the outskirts of the capital, about 4:30 pm when he was on his way to Faridpur.

Dhaka Metropolitan Police assistant deputy commissioner Walid Hossain told reporters the three Jamaat leaders had been arrested in compliance with the warrants issued by the court. They will be produced in court on June 30, he said.

The Ramna police took position in front of the Jamaat headquarters at Moghbazar area in Dhaka at 5:00 pm to thwart any unpleasant situation as a large number of Jamaat activists gathered there after the arrests, the police officer-in-charge, Shibly Nomani, said.

Jamaat activists clashed with the ruling Awami League-backed Bangladesh Chhatra League [student from of the ruling party] activists in front of the Press Club during at the time of Nizami's arrest.

Jamaat will go out on demonstrations across the country on June 30, 2010 in protest at against the arrest of three of its top leaders.

Immediately after the arrests, the party's central committee made the decision at an emergency meeting on Tuesday evening, Jamaat's nayeb-e-amir (vice-president) Maqbul Ahmad told reporters after the meeting.

Earlier in the day, Dhaka metropolitan magistrate Mehdi Hasan Talukder issued the warrants for the arrest of Nizami, Mojaheed, Saydee, and Rafiqul as they did not appear in court in defiance of its summons. Another accused in the case, the Islami Chhatra Shibir president, ASM Yahia, however, secured bail from the same court in the same case.

The court posted for August 3 the next hearing in the case.

On March 21, the Bangladesh Tariqat Federation [a radical group supported by the ruling party]'s secretary general Syed Rezaul Haque Chandpuri filed the case with a metropolitan magistrate's court accusing them of hurting religious sentiments of the Muslims. The case stated Rafiqul Islam Khan at a discussion in Dhaka on March 17 compared jamaat's leader Moulana Motiur Rahman Nizami with the Prophet of Islam.

“The accused compared Nizami with our beloved prophet, saying Nizami is facing the same conspiracies that our Prophet Muhammad faced while he was preaching Islam during his lifetime. Thus they hurt the Muslim sentiments,” the case statement said.


The Jamaat leaders were initially summoned to appear in court on April 28 but they did not show up.

Thy court on April 28 issued another summon asking them to appear before in court and that was also disobeyed.