"Senate's call for the sack of Service Chiefs, collective Will ofNigerians", PDP Chairman 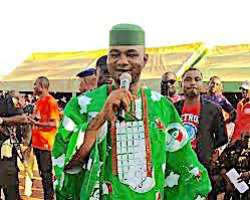 The Chairman, Peoples Democratic Party, Ebonyi state, Mr Onyekachi Nwebonyi has described the Senate's call for the resignation or sack of the service chiefs by the president as the collective will of Nigerians.

The Chairman made this remarks in a press statement he made available to newsmen in Abakaliki, Ebonyi state.

Mr Nwebonyi lamented that since the appointment of the present service chiefs insecurity and insurgency have been escalating in the country.

He pointed out that the Northwest has been witnessing unprecedented attacks by insurgents, and elsewhere in the country while Fulani herdsmen have been unleashing mayhem on innocent Nigerians unchecked.

He noted that all those obtained because the security and defence architecture of the country was completely out of kilter.

"The resolution of the senate for the sack of the service chiefs is therefore a clarion call that ought to be heeded by the presidency, especially now that the Magu case has turned out to exonerate the senate.

"The Magu Gate is just one facet of the necessity for their ouster if they can't voluntarily resign. The law stipulates 35 years of service for retirement if age permits, but unfortunately, all the service chiefs have put in more than 38 years in service.

"The prerogative of the president, methinks, should hinge on exigency and expediency. A position which ineptitude, indignation, and contradiction to the law define, what is the presidency's rationale to hold on to it?

"In as much as I do not want to criticize Mr. President, he should understand that his prerogatives have always been anti people. It is on record that the chief of army staff enrolled into the service in 1981, 39 years ago, the chief of defence staff, chief of air staff, and chief of naval staff all enrolled in 1979, 41 years ago.

"What then is the president's prerogative?
With candour and every respect to the office and person of the president, I vehemently posit that the service chiefs should retire or be retired compulsorily.

I therefore call on President Buhari to swallow his pride and heed the resolution of the senate", he concluded.