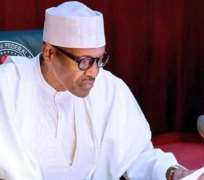 President Muhammadu Buhari has named train stations along the Lagos-Ibadan and the Itakpe-Ajaokuta-Warri corridors after “deserving Nigerians”, the Minister of Transportation, Rotimi Amaechi, has said.

Presidency aide, Tolu Ogunlesi, revealed this on Monday in a tweet.

According to Ogunlesi, the Apapa station was named after Bola Ahmed Tinubu, while the Agege station was conferred on the Minister of Works and Housing, Babatunde Fashola.