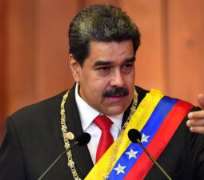 Ambassador of Venezuela to Nigeria, David Caraballo has called on the United Nations to intervene in the alleged human rights violation against citizens of Venezuela to uphold its sovereignty.

Caraballo made the call in Abuja during the commemoration of the 209th Independence of the Bolivarian Republic of Venezuela and the 237th birthday of Simon Bolivar, Liberator of Venezuela.

He alleged that some of the Human Rights violation against Venezuela includes the U.S. interference in its Constitution, imposition of the economic coercive measures and looting of Venezuela's funds and resources.

The envoy said Venezuela was trusting on the multilateral mechanisms of the UN to preserve its democracy, independence, sovereignty and constitution which has been under threat from the U.S.

“Today we are celebrating with the Diplomatic Corp, with the Solidarity Movement, with the students for the spanish language and other friends.

“From the Independence until today, we are supporting and fighting against the unilateral coercive measure, and the Venezuelan people are working together.

“Working to defeat all the threats, all the aggressive actions against our independence and against our sovereignty.

“For more than five years ago when President Obama declared and signed an executive order saying that Venezuela is a threat for the internal security of the USA.

“And after Obama, with Trump, there have been unilateral coercive measures where they blocked and freeze the funds of Venezuela's banks institutions in different European and American banks.

“Presently, the bank of London has more than 53 tones of reserve of gold of Venezuela, they froze this amount and they do not recognize the legitime government of Venezuela.

“They have stolen more than 7 billion dollars in different accounts in different countries, properties of Venezuela,” Caraballo said.

Caraballo said Venezuela's President, Nicolas Maduro had instructed the country's Ministry of Foreign Affairs to press the complaints in the International Criminal Court against the U.S. government.

The envoy said that Venezuela would use its position in the United Nations Human Rights Council (UNHRC) to defend the abuses from the U.S. and other countries.

“We believe in the multilateral mechanism to solve these situations and also we have enough capacity to increase our economy capacity in the size of the country.

“We have the chairmanship of the Non-Alignment Movement. Venezuela believe in the multilateralism, in the solidarity, we believe in the capacity of diplomacy to solve the problems,” he added.

The News Agency of Nigeria (NAN) reports that the Venezuela Embassy in Abuja marked the Independence in a low key in accordance with COVID-19 safety precautions with limited guests observing physical distancing.

The event also showcased a video of the history of Afro-descendants, highlighting how important Africa is to Venezuela.

It also showcased various investment opportunities and tourist areas of interest for Africans and Nigerians to key into.(NAN)