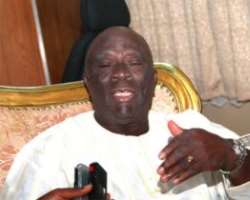 Notable Nigerians, including the leader of Yoruba socio-cultural organisation, Afenifer, Chief Ayo Adebanjo, on Saturday, blamed the Federal Government over the reintegration of 601 repentant Boko Haram terrorists at the weekend.

The repentant former BokoHaram militants were formally graduated from the DRR Camp at Malam Sidi in Kwami Local Government Area of Gombe State after months of demilitarisation, the Coordinator of Operation Safe Corridor, Major General M. B. Shafa said on Saturday.

However, Chief Adebanjo, expressed strong opposition to the move, declaring that the step was wrong. Speaking with Sunday Tribune on the telephone, the elder statesman pointed out that video evidence doing the rounds showed that “the so-called deradicalised Boko Haram members would never be enemies to their former colleagues, no matter the kind of reform they could have gone through.”

But while speaking during the reintegration ceremony, Major General Shafa explained that before the commencement of the process, the DNA samples of all of the former terrorists were collected, just as their biometrics were also captured using the National Identity Management Commission (NIMC) facilities for easy reference in the future.

He added that the background information served as a guide for the experts, Local Treatment Team (LTT) to enable them to properly place the clients for treatment therapies and vocational training.

He explained that The LTTpersonnel were experts in various fields of radicalisation and rehabilitation therapies drawn from the Nigerian Correctional Service (NCoS). It was learnt that out of the 601 graduates of the Batch 4 clients who arrived in two batches on 27 November and 14 December 2019, 592 are Nigerians from 10 states across the country, while 14 are foreigners from neighbouring Cameroon, Chad and Niger republics.

North-East commission welcomes move The North-East Development Commission (NEDC) said it supported the reintegration of the 601 repentant terrorists. Head of Corporate Services of the commission, Abba Musa made this known while speaking on behalf of the Managing Director, Malam Mohammed Alkali, during the graduation ceremony.

He said the items donated by the government to support the ex-militants included welding machines, carpentry tools, barbing kits and generators, washing machines, etc. The state governor, Muhammadu Inuwa Yahaya, commended the repentant insurgents for taking the bold step to change and be useful to society.

Represented by his deputy, Dr Manneseh Jatau, he enjoined them to contribute to the growth of their society. However, speaking on the development, Chief Adebanjo recalled that people had continuously demanded for change of service chiefs, due to the inability of the military to defeat the deadly terrorists, despite huge resources committed to the battle.

“It's a wrong thing (reintegration) to do. That is why people will say this Boko Haram of a thing is part of ethnic cleansing. They have seen videos of soldiers complaining that they saw soldiers in the same uniform with them engaging them in a gun duel, or soldiers in a different uniform also ambushing them while in pursuit of Boko Haram. It is a sad thing.“That is why people would say the Army is not in control and they have a private agenda.

“It is wrong; they are never deradicalised, a leopard doesn't change its skin. They can never be deradicalised. What kind of deradicalisation would they do to reform them? It would amount to having enemies within and outside. You can't make them enemies to their former colleagues,” Chief Adebanjo said.

Similarly, National Secretary of Association of Middle Belt Ethnic Nationalities (ASOMBEN), Reverend James Pam, said it was callous and insensitive for the Federal Government to release alleged deradicalised terrorists into the society.

Pam told Sunday Tribune that government was simply rewarding terrorism, adding that he wondered how the relations of those they had killed and displaced feel that killers of their relations were being handsomely rewarded. “In short, what the government is doing is rewarding terrorism. This is a handsome reward; they are fed, clothed and given money. We heard that some of them will be absorbed into the Nigerian Army. There is a government an official who said they can join the Nigerian Army and even become president of Nigeria one day.

“The annoying part is that these were people who were terrorists. They terrorised this country. The people they killed and displaced have not gone back to their homes. Their wives and relations are still in IDPs camps in Borno, Yobe and other places neglected. “And the same people who killed their relatives are being released to mix with them on the streets; it is an insult and injustice,” he said.

According to him, the government may regret its action, if not immediately, but on the long run, because there is the possibility that they return to the bush to join their terrorist gang and become more dreadful than before. “Government has not clearly defined repentant and radicalisation.

Is it possible for terrorists, within a year or two, to be deradicalised? Where is the radicalisation centre in Nigeria? Do we have experts that can do that work? These Boko Haram members are not ordinary terrorists. They are ideological terrorists; it is an ideology they have been imbibing.

“How do you remove that ideology, the idea that every Nigerian must be a Muslim? And they have gone as far as teaming up with the Islamic State from the Middle-East and formed ISWAP. That should be a serious concern. How do you change that ideology?

“So, it is foolhardy and totally wrong of the government. Victims of Boko Haram are neglected in most of the IDPs camps and their foods are stolen. Soldiers are raping them. Many of the girls are into prostitution and they are dying of starvation,” he lamented.

In the same vein, Urhobo leader of thought and chieftain of the Peoples Democratic Party (PDP), Chief Sunny Onuesoke, condemned the reintroduction of the terrorists. “Even in the barbarian days, there is what we call 'rules of engagement,' not to talk of the 20th Century where justice is the order of the day.

It's a shame that Nigeria has degenerated to this low level of injustice. “The global stand today is: 'We don't negotiate with terrorists,' let alone granting killers amnesty. The question is: Amnesty for what? For burning down churches, mosques and killing innocent Nigerians?

What is the response of the Federal Government towards the families of the people that were killed?” he queried. Onuesoke dismissed attempts by some Northern leaders to draw a similarity between activities of Boko Haram and former Niger Delta militants.

“The Niger Delta's so-called militants were not militants, but people advocating for their God-given wealth and rights. Niger Delta people were only requesting what is theirs, but the Federal Government came with attacks on them and tried to confiscate the people's natural resources given by God.

“Niger Delta people are genuine agitators and not killers and murderers like Boko Haram. There's no comparison between the two issues at stake: One is criminal and the other agitation,” he said. 'Govts need to do more for victims' Also, a Northern elder and member of the Selection Committee of the Arewa Consultative Forum (ACF), Colonel Muhammad Abdul (retd), called on federal and state governments to put more efforts in ensuring that victims of criminal activities are not ignored.

Speaking in an interview at the weekend, he said survivors ought not to be allowed to undergo more pains, adding that the living conditions of those who were suffering in various hospitals were not pleasant. The elder who is also the district head of Tikau in Yobe State remarked that the living condition of those at the various IDPs camps were not good. He said it was the responsibility of government at various levels to come to the aid of the victims. (Sunday Tribune)