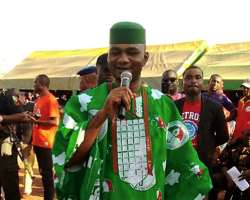 The PDP aspirants for the Local government election in Ebonyi State has condemned in its entirety the postponement of LG elections by EBSIEC from August 15th to August 29th.

The State Party Chairman, Barr. Onyekachi Nwebonyi at the stakeholder meeting at the Party Secretariat in Abakaliki said the party was not happy with what they are seeing adding that some of their party loyalists were behind that.

Nwebonyi described the situation as worrisome and unbelievable, saying it is not an easy game to return to a level already passed by the party and other parties in the state.

He said the development came as a result of the activities of some of their party members hiding under other political parties who went to court and got an order of the court directing that the state electoral commission should start all over again.

The Chairman expressed dissatisfaction over the development, however he said being a law abiding party they have no option than to abide by the decision of the court as being directed to them by EBSIEC

He announced that the party will revisit her primaries and maintained that they will put their house in order to ensure that they participate validly in the fourth coming local government elections.

“PDP is a law abiding party and we believe in the rule of law, we are not happy with the development but being law abiding party, we have no option than to abide by the decision of the court and as been directed to us by EBSIEC.

“We shall revisit our primaries and we shall put our house in order to make sure we validly participate in the forthcoming local government election in Ebonyi state.

“We’ve reached so many decisions like I said, we will be going into primaries again and we will also advertise for selling of forms. So anybody who was not privileged to participate in our primaries previously is at liberty to buy form now to participate in the election.” The Chairman reiterated.

In their respective opinions, the National Vice Chairman of the party, Chief Austin Umahi, Ebonyi State Governor, Engr. David Umahi and the Speaker of the state house, Hon. Francis Nwifuru maintained that there is no gain in making case, rather the party should do well to conform to the adjustment so far made by EBSIEC.

“PDP is a party that observes the rule of law.

I think it’s better for us to think twice to go ahead and to do primaries. As a matter of urgency, this primaries is happening this coming Saturday, the 15th day of August, 2020.

“I think it’s better we prepare for this exam and face it squarely.

If disfire, you have disfired.
The most important thing is to get to your destination, not minding your distractors.”