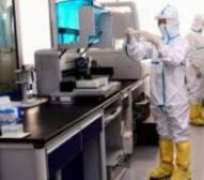 The Nigeria Centre for Disease Control (NCDC) says there are now 59 laboratories with the capacity to test for COVID-19 across 29 states and the FCT, while two rapid diagnostic are in the pipeline for validation.

Dr Chikwe Ihekweazu, Director-General, NCDC, made this known during the Presidential Tasks Force (PTF) on COVID-19 briefing on Thursday in Abuja.

Ihekweazu said that the centre was working to ensure that testing capacity was available in remaining states across the country.

He stated that the NCDC team was currently in Zamfara, Kebbi, Gombe, and Taraba states.

In a bid to scale up national testing, the DG said the centre was leveraging on existing laboratory and converting them to test for COVID-19.

“There are high throughput labs that existed for HIV testing, GeneXperts. Other approaches are inclusion of private laboratories and rapid diagnostic test kits.

“There are 45 labs that can carry out real time PTR testing across the country, while four mega PCR labs have been activated to include; two national reference lab and the defence reference lab in Abuja, one lab at the, Chukwuemeka Odumegwu Ojukwu University Teaching Hospital and another in Lagos,” he said.

Ihekweazu also informed that seven private laboratories have been activated in Lagos, while two were almost ready in Abuja.

“The private sector has seen it's not as easy as we originally have thought,” he said.

He added that 13 GeneXperts have been activated in 10 states, out of 400 available in the country.

On rapid diagnostic test kits, the DG said the centre have been working with Medical Laboratory Science Council of Nigeria to validate a number of kits.

“There are two that are showing good promise, the validation process is ongoing and in the next couple of weeks, we should be able to know if they are able to be included,” Ihekweazu said.

On the target to test two million people by the end of this month, the DG said the testing in itself was not the goal, but that the goal was to bring people into care through testing and enable contact tracing to happen for those who were positive and generally move the system along.

On complaints from Nigerians over delay in getting COVID-19 test results, Ihekweazu informed that an online platform was underway where patients could access using a code to download their results once they get a message notification.

“That platform is almost ready, we will be piloting it in Abuja first, once it demonstrates utility, we will scale it up across the country,” the DG said.

Ihekweazu said the centre was ramping up stockpile of reagents and the country would have foresaw testing challenges.

He further informed that 250,000 people have been tested in the country so far. He announced that Nigeria carries out 3,000-4,000 tests daily.(NAN)