25 teenagers arrested after they were caught shooting blue film 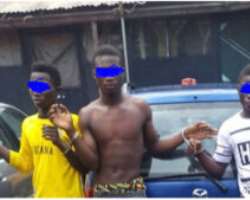 Twenty five teenagers (25), 10 girls and 15 boys have been arrested by the Kenya Police for shooting blue film (pornography) in Kenya's Kakamega County.

The teenagers who are said to be in Form Two and Three, are between the ages of 13 and 17.

The Mastermind of the act, Caleb was also arrested.

According to a garbage collector who withness the event and summoned the police, he was attracted to the scene after he saw a polythene bag full of condoms.

Getting closer, he was shocked when he saw the teenagers having sexual intercourse and another person recording. He then notified the police immediately.

According to the OCPD of Kakamega Central, David Kabena who confirmed the arrest said that the minors were found during the act were arrested.

Kabena added that they will deal with Caleb for misleading the teenagers into this act. LIB