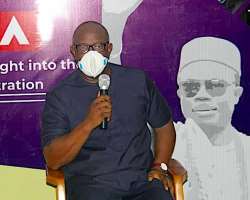 Speaking through the Project Coordinator of the Anambra chapter of Nigeria Erosion and Watershed Management Project (NEWMAP), Engr Mike Ivenso, governor Obiano observed that Anambra State needs urgent help as it has become the undisputed capital of gully erosion in West Africa.

Engr Ivenso who spoke as a guest at the weekly “Meet the Media” forum organized by governor Obiano’s Media Team in Awka recently regretted that in spite of the proactive steps taken by the government of Anambra State to stem the onslaught of gully erosion, the state hosts over 1000 geo-referenced gully erosion sites that are known at the moment. Narrating the colossal scale of the devastation wrecked on the state by gully erosion, Ivenso said “when you think of erosion in Anambra State, don't think about the deep gully that you see. Think about the lives that have been lost. Think about the businesses that are suffering, the children that won't be able to go to school, the market women that can't access their markets and farmlands to be able to take care of their families.”

According to him, “erosion in Anambra State is measured in terms of fatalities, houses and businesses caving in from a landslide and burying people. These are stories that have been brought to us by the people who have witnessed it first hand; the destruction of farm lands, critical infrastructure, power lines, roads, telecommunication masts, churches, schools and communities are divided and cut off completely that brothers and sisters cannot mingle amongst themselves. These are the social destruction that erosion brings. So, we are not fighting erosion just for the sake of erosion but we are now fighting erosion because of the human beings that are impacted. Erosion has become a social issue more than an environmental issue in Anambra State.” Speaking on the achievements of NEWMAP in Anambra State under Governor Obiano, Engr Ivenso revealed that no fewer than 14 gully erosion sites have been simultaneously tackled by NEWMAP under the Obiano administration. This is outside of other sites handled directly by the Ministry of Works and the Ministry of Environment. “It tells you in specific terms, what the Obiano administration is doing to curb the erosion menace in Anambra State,” he observed, further pointing out that “the message we are sending to Ndi Anambra today is to invite them to partner the government and drive the campaign to ensure that our people imbibe those socially and environmentally friendly practices and attitudes that help to reverse the formation of gullies in Anambra State.” In specific terms, Engr Ivenso urged Ndi Anambra to imbibe the practice of harvesting storm water from within their immediate premises by installing structures that will make it possible for rainwater to flow from rooftops to a storage tank.

“Even though the tank won't take the whole water, it slows the velocity of water from a height. So, from the tank, it now flows very quietly and that removes all those erosive force that it has. When each and every onye Anambra installs such tanks, you will see the great impact it will have in helping to reduce erosion. We are also urging our people not to build discriminatory, the laws in this state are made to protect us, to guide us, people always fall foul of the law and they think that they are trying to deal with the system, but we are actually dealing with ourselves. When you build on water channels, water will naturally find its way. Therefore, the process of finding that channel causes trouble for the next man. We are asking our people also to imbibe the culture of not dropping waste in our drainages, because when you dump refuse in the drainage, it blocks the flow of water and it finds a different channel and either causes flood for the neighbors or it causes erosion in a different area,” Ivenso further explained.