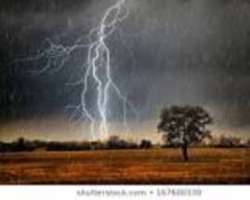 Lightning strikes have continued to kill people in India's eastern state of Bihar as recent floods have affected more than 350,000 people, officials said on Tuesday.

According to officials at Bihar disaster management department, 16 people lost their lives in the recent lightning strikes in 10 districts of the state.

Over the past two weeks, more than 150 people were killed in similar strikes in the state, with 350,387 people having been affected by the floods.

Disaster management officials said the victims were either working on their fields or had taken shelter under trees at the time of lightning.

Authorities have set up relief camps in Supaul and Gopalganj for the people and reports said people in other affected districts have taken shelter with their friends and relatives.

The minister instructed disaster management department officials and the district magistrates concerned to ensure the evacuation of people living in low lying areas of Gandak river discharge to higher and safer places.

Officials said water in Ganga, Baghmati, Kamlabalan and Mahananda rivers was flowing above the danger level at several places.

Floods have also ravaged northeastern state of Assam where 24 districts are inundated. (Xinhua/NAN)