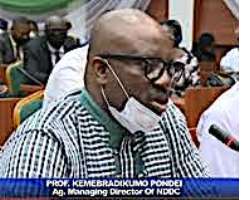 The acting managing director of the Niger Delta Development Commission (NDDC), Kemebradikumo Pondei, has said the commission spent N1.32 billion as ‘COVID-19 relief funds’ for staff, not N1.5 billion as earlier reported in the news.

Mr Pondei said this during Monday’s hearing by the House of Representatives’ NDDC committee on the alleged financial recklessness at the commission.

At a Senate hearing about a fortnight ago, Mr Pondei said regarding the COVID-19 relief fund paid to NDDC staff, “only N1.5 billion was used to take care of staff” despite being paid their salaries.

“The youth were given palliatives to help cushion the effect of the pandemic on the people. The youth were idle and to avoid violence, they were paid,” he added.

However, on Monday, when asked again about the ‘relief funds,’ he said he must have said “1.5 billion” while he was not attentive.

“The amount the IMC used to take care of NDDC staff as COVID-19 palliative was N1.32 billion, not 1.5 billion,” he said to the question posed to him by the coordinator of the panel, who took over after the chairman stepped aside at the start of the hearing over allegations of bias.