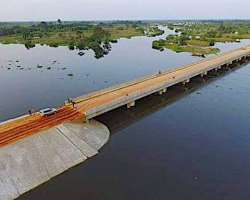 Although the primary responsibility of every government is the safeguard of people and property within the geopolitical enclave under its authority, the top prominence of road infrastructure in the indices for measuring good governance is undebatable. This is more so in our politico-economic clime where the heavy clamour for roads as civilizing agents makes a huge demand on the government. Governor Willie Obiano of Anambra State has creditably demonstrated responsiveness to the people’s yearnings for good roads. In his determination to expand the frontiers of good governance in the state therefore, the governor, recognising the efforts of his immediate two predecessors to offer Ndi-Anambra serviceable roads, set out early to raise the stake. It is observable that the success the administration has made of this commitment has an immense contribution to the cult following it enjoys from the people.

A close look at Obiano’s pattern of intervention on roads shows a strategic deployment of energies in the different sections of the road and ecological needs of the state. The governor deploys enormous energy in the maintenance of virtually all of the already existing roads and bridges some of whose fast rate of deterioration if left unchecked would have easily reversed the tale of good roads in state. While the Anambra Road Maintenance Agency, ARMA, busies itself with the huge demands of road maintenance, filling potholes and effecting patches across the state, the Ministry of Works under the watch of Engr. Marcel Ifejiofor as commissioner remains the fulcrum of Gov. Obiano’s plausible attainments in increasingly stretching road reach to the greatest number of communities across Anambra State. Some of the projects that make the list of Gov Obiano’s strategic roads are actually virgin roads that tear through fields, thick bushes and across rivers to connect some Anambra communities at the extremities of the state which, before the road projects found them, had minimal or no contact with civilization. It is pertinent to note that some of these communities either provide vast expanse of arable land that counts in Gov. Obiano’s expanded agriculture scheme, or occupy other strategic roles in the State’s projected economic arithmetic.

The 43 kilometre road stretching from Aguleri-Uno – Aguleri-Otu to Mkpu-Nando exemplifies such critical interventions. This project includes a long completed 280 meter bridge that crosses Omambala River, tracing Ndi-Anambra who knew no roads and were deprived unhindered socioeconomic interactions with their peers across the river. Added to this critical intervention on road is the 11.2 kilometer road, with a completed bridge, from Umueje in Ayamelum to the oil fields in Aguleri-Otu. The Umueje and the Aguleri-Uno – Aguleri-Otu bridges are most significant as they provide easy access through Anambra State to the oil fields in the state which hitherto could only be accessed through Enugu and Kogi States. These bridges and roads save the state the erstwhile burden of explaining why the other states who provided access to the states wealth should not be partakers in harnessing it. Besides this, the highly agrarian communities that these roads traverse now have the opportunity of selling their farm products and fishes at good prices to traders who now either freely come to them or they go to meet in the cities.

Some other roads meant to locate farmers and other economic interests as might apply, as well as propagate civilizing culture and modernity in the hard to reach areas are found at Ifite-Ogwari, Omor – Umumbo, Ogwuaniocha, Oroma-Etiti – Onono, Mmiata – Nzam, Achina – Onne etc. Some of these communities were easier accessed by water through Delta, Kogi and River States. By this thrust, the Obiano administration’s determination to free Anambra of communities that suffer the stranglehold of isolation is increasingly yielding the desired dividend.

It is commonly held that Anambra posts the best spread of paved road network in the country. This position is increasingly getting more credible with the Obiano administration’s insistence on journeying by road to meet Ndi-Anambra wherever they are found in his domain. Towards this end, and in the spirit of continuity, the administration has completed the six bridges it inherited from the past administration; it awarded 20 bridges out of which 8 have been completed and 12 are ongoing. The administration has 77 roads in Anambra North Senatorial Zone, 72 in Anambra Central and 53 in Anambra South, a good number of which are completed while some others are ongoing. Many of the ongoing road projects have their drainages, culverts and greater percentage of the work already in place.

Apart from notable long stretches of intercity and inter community roads, equally of note are the many ancillary roads the administration has made in Awka, Onitsha, Nnewi, Ekwulobia, Nanka, Amichi, Ogidi, Abatete, Aguleri, Ichida, Adazi-Nnukwu, Agulu, Nnokwa, Nnobi, Azigbo, Ogbunike and indeed in most of the towns spread across the three Senatorial Zones of the state. Without doubts, if the Obiano administration sustains its commitment to road infrastructures to the end of its tenure, a greater Anambra with a lot greater access is sure to evolve.

The essence of roads as precursors to other life and economic enhancing agents like electricity, pipe borne water etc. should not be lost to anyone. Some of the new roads already have electricity poles lining them as the State Government’s electricity scheme makes its way to the communities.

Indeed, Gov Willie Obiano’s unassailable strides in the provision of serviceable roads for Ndi-Anambra competes favourably with other brilliant entries among the constellation of hallmarks of good governance going for the administration, atop of which the provision of security, being the most fundamental, comfortably sits beyond challenge.