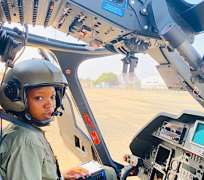 The Prominent Civil Rights Advocacy group -:HUMAN RIGHTS WRITERS ASSOCIATION OF NIGERIA (HURIWA) has expressed disappointment and dissatisfaction with the further explanation offered by the hierarchy of the Nigerian Air Force (NAF) on the cause of death of Nigeria's first ever female combat pilot Tolulope Arotile who according to official line was killed by an ex- Classmate in a car accident inside the Air Force base in Kaduna.

Against the backdrops of the additional information from the Nigerian Air Force in a media briefing in the nation's capital of Abuja in which the authority disclosed the identity of the said ex-classmate of the deceased and other two occupants of the car in which she was reportedly ran over and that they would be handed over to the police for investigation and prosecution since it is a civil matter, the Prominent Civil Rights Advocacy group-: HUMAN RIGHTS WRITERS ASSOCIATION OF NIGERIA (HURIWA) faulted this deliberate attempt to obfuscate a very serious matter that ought to receive a scientific, medical, ballistic and forensic examinations with a view to ascertaining the real cause of her death because as we had earlier stated this official line by the Nigerian Air Force does not hold water and sounds unbelievable.

In a statement by the National Coordinator Comrade Emmanuel Onwubiko and the National Media Affairs Director Miss Zainab Yusuf, HUMAN RIGHTS WRITERS ASSOCIATION OF NIGERIA (HURIWA) said the best way out of this conundrum is for the federal government of Nigeria to constitute a high calibre team to carry out the Coroner's inquest and for the comprehensive medical and autopsy examination to be conducted on her remains so as to put to rest the suspicions that she was killed because of her exploits against terrorists and armed bandits by internal moles inside the Nigerian military who are sympathetic to the terrorists and armed bandits. HURIWA stated that it is undeniable that there are saboteurs within the military that are actively sympathetic to terrorists and armed bandits and these elements in the military are not happy whenever a professionally committed patriot is deployed to the theatre of the counter terror war.

"For the purpose of history, we in the HUMAN RIGHTS WRITERS ASSOCIATION OF NIGERIA (HURIWA) are hereby asking the Nigerian government to adopt the most credible steps to investigate the remote and immediate cause of the death of this national icon who is been suspected by millions to have been murdered and as most people are saying, this tales by moonlight from the Nigerian Air Force is grossly insufficient and indeed is a slap on our faces as a nation. There are too many loose ends that ought to be adequately addressed as far as her death is concerned. This additional information from the official quarters is not different from the hastily conjured reasons for her demise as was given to Nigerians by this same Air Force on the day of her death. We think dismissing this serious matter as a civil matter is reprehensible and odious. We condemn this attempt to obfuscate a very serious matter of state that should be adequately addressed using the most credible independent mechanisms to arrive at a factually accurate findings. Anything less than this amounts to sweeping the matter under the carpets and the ghost of this icon of our time will haunt her killers and their sponsors".