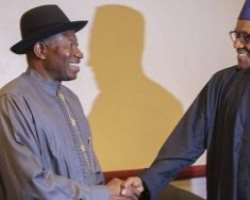 President Muhammadu Buhari has approved the naming of the Railway Complex in Agbor – the operational hub of the Itakpe-Warri line – after former President Goodluck Jonathan, Channels Television is reporting.

Both Presidential aide, Tolu Ogunlesi, and Minister of Transportation, Rotimi Amaechi, confirmed the development via tweets on on Saturday.

According to the Channels report, Ogunlesi credited the news to Minister of Transport, Chubuike Ameachi.

The facility will now be known as the Goodluck Jonathan Railway Station and Complex, Ogunlesi announced in a tweet on Saturday.

BREAKING | President @MBuhari has approved the naming of the Railway Complex in Agbor – the operational hub of #ItakpeWarriRail Line – after former President @GEJonathan . It will be known as the Goodluck Jonathan Railway Station & Complex — Minister of Transport, @ChibuikeAmaechi

Amaechi himself also tweeted to confirm the renaming.

He however noted that the test-running of the newly renovated rail line's new coaches is still ongoing.

Today, we continued test-run of our new coaches on the completed Itakpe-Warri standard gauge rail line.

We've named the largest station on this route – the Agbor railway facility and station after former President Goodluck Jonathan. pic.twitter.com/RZ8HtnigLi

The Itakpe-Warri rail line has a length of 276 km and links Warri in Delta State to Ajaokuta in Kogi State.

The rail service has 12 stations with two located between Itakpe, Ajaokuta, and Warri.

The line, which was started in 1987, was built to move iron ore from mines around Itakpe to the steelworks at Ajaokuta but was abandoned for many years.

Jonathan, Buhari's predecessor, initiated most of the railway projects which the incumbent administration consolidated on.

The naming would come as a surprise to many Nigerians given the amount of criticisms heaped on Jonathan's administration by the Buhari administration.

Jonathan was recently appointed head of a mediation team acting on behalf of Ecowas, the West African regional bloc.

Jonathan'' appointment was backed by President Buhari, who provided an aircraft and other logistics needed to make the assignment successful.

These may be indications of change of attitude toward the former president by Buhari administration.