“Measure our Performance on Road Construction in Anambra State based on Impact – Engr. Marcel Ifejiofor 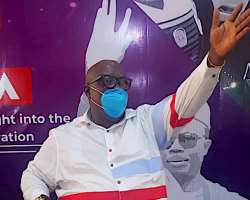 Appearing as a guest on the inaugural edition of “Meet the Media” the Hon. Commissioner for Works in Anambra State, Engr. Marcel Ifejiofor articulates the basic philosophy of Governor Willie Obiano’s approach to the construction of roads and bridges in the state. Engr. Ifejiofor also offers a far-ranging insight into the status of roads, bridges and erosion control projects across Anambra State.

Come with me…
Opening remarks by Ifejiofor: Thank you CPS and the Governor's Media Team It's a pleasure to be here. Our ministry is media friendly and in this administration headed by Chief Willie Obiano ,we state the facts as they are. We don't play politics with the things we do for Ndi-Anambra. Anything we say is verifiable. You can check for yourself to confirm if what we are saying is true. My ministry is in charge of roads, bridges and erosion control and we are doing that perfectly.

Question: One contentious issue is the area of the number of roads done by this administration. Ndi Anambra would like to know how many they are. Another one is the Onneh-Achina-Ogborji Road. Where are we on that road? Question: People will always bring up this issue of favouritism in terms of the distribution of infrastructure. Can we get a break down of roads in terms of senatorial zones so that people will have a full picture of what the Ministry is working on? Again, there are some roads that appear to be lagging behind in development a case in point is the Oye-Agu- Abagana-Nimo Road. Can you tell us the true position?

on the Oye-Agu Abagana – Nimo Road, I meet with the Commissioner for Finance and the Accountant General because of the current economy. We have sat down to review all the roads based on percentage completion and fortunately that road is one of the roads that is almost over 50% completed with the drains. It is in our top priority. Let me assure them that before December that road will have been completed.

Question: When this Administration began, His Excellency made it very clear that his administration would focus on the construction of roads that are of economic importance. Has the focus changed or is it still the same?

Question: Why is the road connecting Amansea-Ebenebe- Awba Ofemmili still in a terrible condition? Could please tell us how many bridges this administration has built?

On the Amansea-Awba Ofemmili road, the case would have been different this time if not for Covid-19 because when I took over as Commissioner for Works, I visited the road and saw that it was very bad. We have constructed between 60-70% of that road. The earth work and drains have been completed and it is remaining asphalting. We have agreed to build the road in phases, one after the other. Many people have complained about the road but we are pleading with Ndi Anambra in that area to be patient. God-willing this administration will complete that road. We are also building a spur of about 500 meters to Ugbenu. We must complete that Road.

Question: How you are collaborating with ARMA to make sure the roads in the Awka Capital Territory are done well?

Answer: Since inception, ARMA has been independent. I don't supervise them. I don't know what they do. But we only synergize as a Government. They have an MD. But on Awka internal roads, when I came in, we designed about 8 roads in Awka just like we did in Onitsha. Obodoukwu road is an eye sore. I'll be there on Wednesday to assure the people that we have not forgotten them that we are coming. We are doing the design and let them bear in mind that we are solving the major problem in Okpoko which are drainages not roads. Sakamori is where all the water in Okpoko flows into. We are trying to dredge Sakamori and Idemili River.

Question: Most gully erosion sites in Anambra State were caused by the poor handling of road construction and wrong termination of drainages. Is there any mechanism in place to build more ecologically friendly roads in Anambra State?

Answer: That has been done. Immediately I came in His Excellency set up what we call a Road Design Review Committee, because like you rightly said one major cause of erosion is poor termination of road drainages. The big gully in Aroli-Obeleagu was caused by a broken drainage. Once it gets broken the water will flow and create a gulley. Same as 100 foot road. Basically what this Design Review Committee does is to make sure that all road drainages are terminated to a natural water body. Anambra has a loose soil. There is a dangerous one around Amichi caused by the same poor termination. So, His Excellency created this Committee and we are making sure that all roads including the ones done before the drainages are properly terminated. It will reduce our vulnerability to erosion. I am the chairman of the Committee. There are other commissioners who are members plus two reputable consultants like Emplan. So by the time we finish what we are doing we must get value for any job awarded in Anambra State, both in terms of cost and in terms of serving its purpose.

Question: Can you give us an update on Amansea-Awa-Ndiukwuenu-Ufuma Road?

Answer: The contractor Stefanutti, is back to site as I talk to you now. There is a terrible erosion in that area but they are working and what we agreed with them is that we won't do this road anymore and expose them. If you do 1km then we Ashpalt it, so we know that anywhere we get to we'll know we have completed it. They have been paid some money so they are back.

Question: The Chisco- Ogbodi Road in Amichi as you pointed out had a gully erosion site seriously springing up in that area and the people are complaining that with each rainfall the gully expands. What are you doing about that road? Again, is there a general standard for road construction in Anambra State or do the standards vary from site to site?

Answer: First of all, on Amichi I had expected you to say thank you to His Excellency and the Ministry of Works for completing one road project in Amichi. That is the fastest road we have completed in history. It was done by the Nigerian Army. I have driven on that road. We are going to do a redesign and we are going to do the road. I have been there to survey the road I can confirm to you that I have plans on how to do the road and do it quickly. On quality of roads, there are so many factors to consider especially in Anambra. The number of Dangote trucks passing our roads are many, every road is designed to carry a certain load. So when the Federal roads in Anambra failed completely the trucks diverted to our internal roads and these roads were constructed to fit into varying grades. Thank God the Expressway is getting better. In addition to that we are going to start putting barriers on our internal roads. That will help prevent heavy duty trucks from plying them.

Question: On the Enugwu-Ukwu -Nise -Nibo Ring Road, there is one particular spot that is very bad and impassible. What is your Ministry doing about that?

Answer: The road you are talking about is under construction. We have completed Nise axis and the contractor is coming back soon. I know the area, it is in a terrible state right now but they will come back to site to tidy up the place.

Answer: I'll talk to ARMA to see how they can fix those broken down portions. But what you said about synergy between Ministry of works and environment we have the synergy and that is why everywhere that we go, we remind the people of the importance of not throwing waste into drainages and having waste bins. I am appealing to Ndi-Anambra, no matter how beautiful a road is, if the drainage is blocked the road will be destroyed. People also build on drainage channels and physical planning has been directed to pull down such buildings.

Question: We are in the 7th year of this administration. Is your Ministry mindful of the time remaining to finish all on-going projects in the state to avoid controversies and to know when to put a stop to awarding new contracts to enable the current administration tidy up and give the next administration a clean slate?

Answer: It is important to note that the politics of what is inherited is not necessary. Government is a continuous process and the most important thing is to do all that you can within the available time. This administration is making sure by the time it hands over, it will be indelible in the minds of the people because of the good works we did. As issues arise we tackle them no matter the time remaining. We are going to leave but anything that we are going to leave must be properly left in a state that it won't be a problem to anybody.

Question: Within the Awka axis, is there is any hope that the GRA can have the facelift deserving of a proper GRA.

Answer: We have designed a lot of roads in Awka. By the time we build 10km of roads in Awka everywhere will be opened up. The design is ready. We are waiting for approval before we get down to work. The one in Agulu Awka will be handled by Niger Cat.

Question: What is the status of the Regina Caeli footbridge asplanned by the administration?

Answer: The Regina Caeli bridge has been designed but His Excellency didn't like the aesthetic of the design and has requested Julius Berger to redesign it. And it will be done. It won't just be just a footbridge but a flyover from St Patrick’s to the other side of the expressway. But in the interim, we'll put speed breakers and speed bumps to reduce the rate of accident on the road.