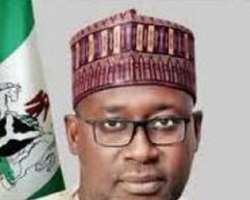 The Federal Government says no fewer than 10 stat.es will benefit from its Partnership for Expanded Water, Sanitation and Hygiene (PEWASH) programme to scale up access to water and sanitation in rural communities.

Mr Suleiman Adamu, Minister of Water Resources, said on Thursday at a virtual meeting with the State Coordinators of the 'Clean Nigeria: Use the Toilet' Campaign.

Adamu noted that three Local Government Areas (LGAs) in those states have been selected for implementation.

According to him, it is expected that the states will match up these interventions with another three LGAs toward improving access to potable water, especially in the rural areas.

The minister said that the 'Clean Nigeria:Use the Toilet' Campaign, approved by the Federal Executive Council on May 8, 2019 was a national programme aimed at ending open defecation by 2025.

“The Presidential Open Defecation Free (ODF) Campaign launch was immediately followed by the signing of an Executive Order 009, on ending Open Defecation in Nigeria by 2025 and other related matters,” Adamu said.

He said that he carried out advocacy visits to state Governors, Ministries, Head of Civil Service of the Federation, Media Houses, Organised Private sector and Nigerians in Diaspora to seek supports toward the federal government efforts in ending open defecation by 2025.

The minister added that although the country was making progress in access to water and sanitation as reflected in the 2019 WASH National Outcome Routine Mappings, more efforts was needed from stakeholders to scale up.

Dr Benson Ajisegiri, Director, Water Supply with the ministry said the PEWASH which was intended to accelerate access to water and sanitation in rural areas was gaining speed.

“As at today, 33 states have signed the PEWASH protocol indicating interest to participate in the programme, Only Borno, Anambra, Rivers and the FCT are yet to sign.

“We have finished the pilot project in Kano and Ogun states, we are now going into the first phase of the project and we are going to kick start that in ten states

“We have worked extensively with the states, identified the schemes and current level of access to potable water supply in all the local governments of each state, especially in the rural areas,” Ajisegiri said.

He said the federal government has prioritised to consider the local government areas that are backward and have disease prevalence with overall agreement for a 50-50 agreement.

The director said that contractors were currently being mobilised to benefiting states and local governments toward improving access to water supply and sanitation.

He noted that 707 water schemes were provided in the pilot states of Ogun and Kano with an overall improvement of access to water in four local governments each.

On criteria for selecting benefiting states, Ajisegiri said that state governments must show commitment, provide funds, carry out baseline survey in each local government and availability of budget for PEWASH for sustainability.

He added that it was the desire of the federal government to see that access to water and sanitation was improved to meet the Sustainable Development Goals by 2030.

The meeting was an avenue for state coordinators of the 'Clean Nigeria: Use the Toilet' Campaign to update the minister on their milestone achievements and challenges. (NAN)