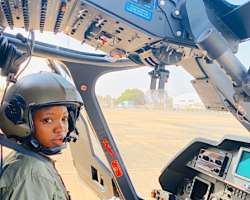 The HUMAN RIGHTS WRITERS ASSOCIATION OF NIGERIA (HURIWA ) is hereby calling on the National Assembly and the International community to investigate the remote and the immediate circumstances surrounding the death of Nigeria’s first female combat pilot Tolulope Arotile .

Our call for a comprehensive and forensic investigation on the cause of her death is inspired by our suspicion that the official line of story told to us Nigerians About her death does appear like a tale by moonlight and a made up story because it is not scientific and not satisfactory to millions of Nigerians who are already insinuating that she may have been killed for a reason known only to her killers and their sponsors.

In a normal civilized constitutional democracy, when such a suspicious death occur , it is incumbent that Government must investigate legally . This kind of story told about her death is not acceptable by any sane person.

The story of how she died as told by the air force has made Nigeria to look like a banana republic, a place where the sanctity and sacredness of a human person is not respected.

We are therefore calling on Nigerian Government to setup a medical/ forensic/ ballistic investigation team to ascertain the actual cause of her death.

We also want amnesty international to look into her death.

HURIWA recalled that the Nigerian Air Force had stated how she died thus: "It is with great sorrow that the Nigerian Air Force (NAF) regretfully announces the unfortunate demise of Flying Officer Tolulope Arotile, who died today, 14 July 2020, as a result of head injuries sustained from a road traffic accident at NAF Base Kaduna.‬ Until her death, ‪Flying Officer Arotile, who was commissioned into the NAF in September 2017 as a member of Nigerian Defence Academy Regular Course 64, was the first ever female combat helicopter pilot in the Service.‬ During her short but impactful stay in the Service, late Arotile, who hails from Iffe in Ijumu Local Government Area of Kogi State, contributed significantly to the efforts to rid the North Central States of armed bandits and other criminal elements by flying several combat missions under Operation GAMA AIKI in Minna, Niger State.

The Chief of the Air Staff, Air Marshal Sadique Abubakar, on behalf officers, airmen, airwomen and civilian staff of the NAF, commiserates with the family of late ‪Flying Officer Arotile‬ over this irreparable loss. We pray that the Almighty God grants her soul eternal rest. Signed by IBIKUNLE DARAMOLA

Air Commodore
Director of Information on 14th July 2020.
Our take-: Nigeria kills her best everyday due to political corruption that has become a trademark of 98% of powerfully connected politicians in Nigeria. We made $206bn from crude oil in 5 years of President Muhammadu Buhari's regime but there is no single national roads infrastructure that is motorable. Insecurity is at its peak and yet the same government goes about borrowing. Also, corruption is systemic and endemic here. Professor Chinua Achebe had terribe road accident and could have died if he was treated here but he lived for many years thereafter because he relocated abroad to the USA. Gani Fawehinmi was misdiagnosed here and nearly died much earlier if not for further medical inquiry with better facilities abroad. Dora Akunyili was misdiagnosed too and we know the result and it is not as if our doctors are not good but there are no facilities to treat patients. Also, licencing of persons to drive is heavily corrupted because a toddler can be granted driver's licence and so most of those who drive on Nigeria's badly maintained roads are just 'hired killers'. We have a very long way to reform Nigeria.

TO SURVIVE IN NIGERIA IS BOTH A SKILL AND A MIRACLE. NIGERIA HAS BEEN MADE THE MOST DANGEROUS PLACE ON EARTH TO LIVE BY THE RULING ELITE.

To the deceased i pray for her repose. For we that are still here in the struggles and battles of surviving in Nigeria, God may your will be done.

Relatedly We condemn the Police IGP, the Rivers state Commissioner of police for sending armed operatives early this morning to the house of the immediate past MD of NDDC Joy Nunieh to embarrass, harass and intimidate her person. Joy Nunieh must not be killed.