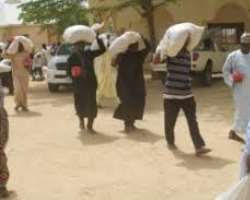 The programme has a target of about 8,238 households that were expected to benefit from the distribution of the pallaitives across the State.

Chairman of the Sub-Committee on Palliatives Distribution who is also the Commissioner Ministry of Humanitarian and Disaster Management, Dr. Abubakar Garba Iliya was represented by the Executive Secretary Yobe State Emergency Management Agency (SEMA), Dr. Mohammed Goje who performed the distribution.

According to him, the beneficiaries comprises of over 300 households in Gulan which include the elderly, women, household heads (WHH), Persons Living With Disabilities (PLWDs), Youth Headed household who were directly or indirectly affected by the pandemic lockdown in neighboring states and other associated challenges.

The Palliative distribution was performed at the premises of Bara Primary School in compliance with Covid19 prevention measures of self distancing.

In his remarks, Dr.Goje told the beneficiaries that it is an ongoing support within available resources of the government, and it will periodically reach out to the most vulnerable populace across the state.