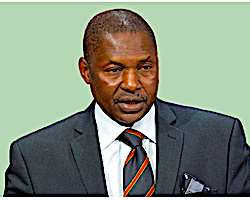 The Rights group said the minister of justice has been unable to sufficiently debunk the information that his son had an extensively lawless social event thereby violating the quarantine act of 1926 which gave MR President the power to impose certain restrictions on number of people to attend a social or religious gathering during this dangerous pandemic period .

However, the Prominent Civil Rights Advocacy group HUMAN RIGHTS WRITERS ASSOCIATION OF NIGERIA (HURIWA) averrred that the son of the minister of Justice who is the Chief law officer of Nigeria flagrantly violated an extant law invoked by Mr President . The only other remedy for Mr President not to sack the Chief law officer of Nigeria and the minister of Justice Abubakar Malami SAN is for him (Malami,SAN) to provide forensic evidence that contradicts the newspaper reports and the avalanches of recorded videos trending on respectable Social media fora including Saharareporters. However, the Rights group said the Justice minister can not sufficiently convince rational Nigerians that these series of photographic evidences tendered and circulated by the media of mass communication are not the accurate reflection of what transpired. Besides, at the wedding, there was a violation of the Central Bank of Nigeria's law prohibiting the defacing of Naira notes and other currencies and bans the spreading of Naira notes because there were abundance of evidence that such a huge disobedience of the law took place and if such will happen in an event of the family of the Federal Attorney General and minister of justice Abubakar Malami it therefore means that we have a lawless AGF if the media evidence is anything to go by.

Again, the ground for the resignation of the minister of Justice Abubakar Malami SAN is that he failed to properly provide supervisory responsibility on the EFCC Administration headed By Ibrahim Magu who allegedly committed financial atrocities and his supervisor ( Chief law officer of the Country) was unable to detect this unprofessional conduct for good five years. What this failure shows is gross incompetence and inefficiency and it will.be fatalistic for Nigeria to have a Chief law office who is unable or incapable or unwilling to provide effective supervisory functions on the agencies under his purview. The AGF has failed by not knowing on time that Ibrahim Magu was absolutely unfit to hold such a high office so he has to quit.

We are calling on the EFCC to carry out proper investigation on NIGER DELTA AFFAIRS Minister Godswill Akpabio and demanding for his immediate sack , except and unless mr President does not care about the people Of Niger delta.

Since Godswill Akpabio came to power there has been one accusation of fraud/corruption or the other.

HURIWA is not accusing him of being the thief but the story of corruption around him is becoming unbecoming as if he is the only minister in Nigeria.

Another worrisome reason is the sexual harassment allegation made against him by the immediate past MD of NDDC JOY NUNIEH .

He needs to go so that he will not use his office to encumber police investigation. And why is the IGP Adamu Mohammed Suddenly deaf and dumb over Godswill Akpabio's sexual harassment allegation and was too fast to demand for D’banj’s arrest over similar allegation? The IGP should invite Godswill Akpabio to give his own side of the story on the damaging sexual harassment claim made by a former officer who served under his supervision. The Minister of Niger Delta Affairs was also heard delving into personal matters against the former MD of NDDC BY saying people should find out from 4 of her husband's how she is not behaving well. We think this is so mundane and banal and unbecoming a conduct expected from a holder of the high office the cabinet level minister in Nigeria. This is shameful.

HURIWA recalled that the Senate, had last week, expressed shock over the stunning revelation that the Nigerian Police Force and the staff of the Niger Delta Development Commission (NDDC) shared N3.14 billion as palliatives for the COVID-19 pandemic.

This was as the NDDC Director of Projects, Dr. Cairo Ojuogboh, accused Chairmen of the Senate and House of Representatives Committees on NDDC of hijacking the 2020 budget of the agency.

Adetunbi pointed out that the expended fund was contained in the document submitted to the committee by the Managing Director of the IMC, Kemebradikumo Pondei.

When invited to the podium to give explanations on the fund, which was captured on the subtitle “emergency payments”, Pondei admitted before the ad hoc committee that N3.14 billion was spent by the NDDC to cushion the effects of COVID-19 on staff of the agency.

He further claimed that part of the money was paid to the Police, youths, men and women to cushion the negative effects of the pandemic and to forestall violence that might erupt in the Niger Delta region.

Giving a breakdown on how the money was spent, Adetunbi said that from the records in the document submitted to the committee by the NDDC, out of the total sum of N3.14 billion purportedly spent on COVID-19, N1.5 billion was shared among the Police and staff of the commission across the nine states of the Niger Delta.

He pointed out that N475 million was paid to the Police from the money to purchase face masks and hand sanitizers.

He also said that N10 million was paid to an unnamed top management staff of the commission (believed to be the MD) while N7 million each was given to two other senior staff of the NDDC.

Reading further from the documents, Senator Adetunbi said: “The NDDC IMC expended on other issues, including COVID-19, to the total of N81.509 billion, from October 2019 to February 2020, and from February to May 30th, 2020, the reason of this investigation.”

He said: “It is on this expenditure that the Senate has called for this investigative public hearing.”

Meanwhile, while defending the spending of the agency, the NDDC Director of Projects, Ojuogboh, posited that the “Commission has not misapplied any kobo” as being alleged by the National Assembly.

Responding to questions from the members of the Assembly, Ojuogboh stated that the IMC inherited a debt of N3 trillion, claiming that the National Assembly hijacked the 2020 budget of the agency.

“We have no problem with the National Assembly, but we have a problem with chairman of the Senate committee on Niger Delta. No one kobo is misapplied since the coming of NDDC IMC.

“The 2020 budget of NDDC has been hijacked by the two chairmen in the Reps and Senate. We submitted the budget since 2019 and nothing has been done on it,” he said.

On the allegation that the IMC unilaterally and arbitrary sacked some staff of the NDDC, the director said that no single staff was sacked.

“We have sacked no staff and all workers on leave have been paid their full salaries. So, anyone who is claiming to have been sacked should bring the sack letter,” Ojuogboh stated.

In his remarks, the President of the Senate, Ahmad Lawan, said that allegations of financial recklessness and misappropriation of funds levelled against the IMC of NDDC were unacceptable, and that propelled the Senate to investigate the activities of the commission.

“Financial recklessness is not an attribute that anyone can afford, whether rich or pootr. It is even worse with the poor, or for the organisation or a country with limited resources,” Lawan said.

HURIWA is therefore canvassing the sack of the Minister of Niger Delta Affairs Godswill Akpabio and the Interim Management Committee of the Niger Delta Development Commission so they can be arrested by the Economicand Financial Crimes Commission (EFCC) for comprehensive investigations and prosecutions if found to have a prime facie case to answer which the Competent court of law should be called upon to adjudicate but the minister and the NDDC management should be dismissed forthwith.