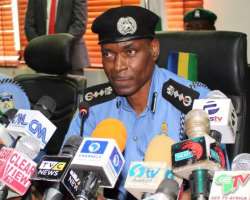 The title “Police recruit constables, bar persons with …” which appeared in the Nigerian Punch Newspaper publication of July 11, 2020, raises key Civil Rights concerns regarding individuals with physical conditions who might be applying for employment with the Nigeria Police Force.

The News Paper stated that “… women who wish to apply must not be pregnant as of the time of recruitment”.

On the face of this disturbing publication, especially with the use of the word ‘barred,” female citizens with interest in police work who demonstrate pregnancy might automatically decide not to even apply.

The fact that a female or “women who wish to apply” to a job of their interest like police work, whether her pregnancy is fully physically obvious or not, is part of her human rights. And automatically announcing to her not to tender an application like other humans, like males is not only a form of forced employment exclusion but a systemic violation of her constitutional and gender rights. A requirement like this, for the purpose of an application and possible enlistment, is a major act of discrimination based on sex and female physical condition.

For far too long in Nigeria, one is aware of outdated rules on female police enlistment and duties which dates to 1943 and 1968, and since 2012 to present, legislations to permanently erase gender-discriminatory provisions continues.

IGP Adamu, it is essential to recognize that pregnancy is a temporal physical condition, which is unique to women, which may or may not affect an employee’s ability to perform many of the usual police duties.

Like everyone else, the female candidate should have the equal chance to put in their application and be invited for an initial interview. Whether she indicates that she is pregnant or not, especially when we know that pregnancy is time-based, and that all police work is not always about physical strength.

During initial interview, no applicant is suddenly asked to undergo any rigorous physical display, especially in the case of female candidates.

As part of the interview guide which should always include recording for all, a certified medical practitioner must be present as specific questions are asked on medical related questions like pregnancy.

IGP Adamu, if it is found out that she is one month or six months pregnant but the interview shows the following; excellent resolving domestic disputes skills, superb writing report skills, effective communication skills, demonstration of tact and sensitivity as it relates to public interactions, quickly and clear thinking skills, attentiveness to detail, good ethical character, excellent interpersonal skills, great problem-solving and conflict-resolution skills, and good coping and stress control skills; will she still be barred forever from enlisting?

IGP Adamu, in modern policing unlike many years back, policing is no longer heavily driven toward physical attributes, such as height, weight and visceral strength.

Now, we know that proactive style of policing generally known as community policing forms the daily aspect of policing and the above attributes I mentioned are what usually makes a difference.

At a time when the Nigerian public and the international world are concerned about police misuse of force which is normally by males, especially during heightened tensions between police and the communities, you need women officers as they are more skilled at addressing interpersonal matters or dangerous related offenses.

In the 21st century, physical strength is no longer a predictor of an officer's ability to handle dangerous situations, and yes police job requires a great level of physical fitness. It is certain that after given birth to the baby, women known for their natural ability to bounce back quickly can join the field training with ease.

IGP. Adamu, using your power of professionalism and discretion, let her at least apply and get an interview.

To deny her that equal opportunity to openly apply and fully respond to police jobs advertisement because she is momentarily pregnant will be inhumane, dishonest, and wrong on the part of the Nigeria Police Force.

Like her male counterparts, it is very crucial that the female candidate as part of the application process, undergo pre employment psychological evaluation and possibly a Polygraph Test in order to determine her to be emotionally, cognitively and ethically responsible, mature and stable for work in law enforcement.

Again, I say, let her at least apply and get an interview.

Professor John Egbeazien Oshodi is an American based Clinical/Legal/Forensic Psychologist and a Police/Prison science-management specialist. He runs the Dr. John Egbeazien Oshodi Foundation, an online and community based nonprofit Psychological, Forensic and Behavioral health Center. He was born in Uromi, Edo State. In and out of Nigeria for professional and humanitarian work. [email protected]