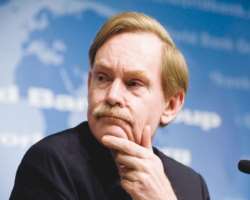 
LAGOS, June 28, (THEWILL) - Five states including Lagos, Kano, Kaduna, Enugu and Cross Rivers have been granted an intervention fund of about $158 million (equivalent of N23.7 billion) by the World Bank to assist commercial agricultural development projects.

The Bank also tasked all the beneficiaries to speed up infrastructural development in their states to ensure effective implementation as a major step to food crisis in the country and make food more available, accessible and affordable.

The project monitoring team leader of the World Bank, Dr. Lucas Akapa said this today during a mission visit to Lagos, tasking the beneficiaries to speed up infrastructural development in their states to ensure effective implementation.

Akapa said: "The World Bank earmarked a sum of $ 158 million for the sector improvement and development in five benefiting states including Lagos, Kano, Kaduna, Enugu and Cross River States within a period of five years."

Akapa expressed dissatisfaction with the slow pace the beneficiaries he claimed are implementing, adding that the project was designed "to be demand driven, and beneficiary oriented, towards achieving sustainability through organized associations’ involvement and public private participation."

But Apaka acknowledged that the states "are making progress towards achieving its developmental objective, because when a project starts you need time to prepare the ground to move. The staff members for the five states are in place, offices are in place and the project has two different components."

Also speaking at the forum, Lagos State Commissioner for Agriculture and Cooperatives, Chief Enoch Ajibose said the state government’s commitment to the project "is quite encouraging."

Ajiboso added that the commitment of the state government was further demonstrated in the unanimous vote by the State Executive Council for the approval of the sum of N168 million for the 2010 counterpart contribution to project, listing the achievement of the project implementation in the state to include the registration of 292 commodity interest groups with over 2800 members.

Ajibose said the state received no objection on commercial agriculture development plan to the tune of over N1 billion for implementation this year from the World Bank, adding that 66 sub projects were prepared out of which no objection were initially received for 21 sub projects valued at over N40 million.

According to him, the Community Interest Group had implemented 18 approved sub- projects valued at about N36 million and another objection has been received for the additional 10 sub project valued at over N20 million."