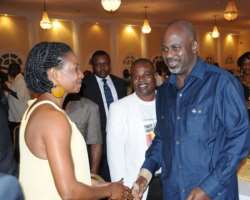 CALABAR, June 29, (THEWILL) - Governor Liyel Imoke of Cross River State has called for a strong collaboration between the public and private sectors to develop sports in Nigeria for it to attain its place as giant of Africa.

Speaking at a State dinner at Government Lodge, Calabar in honour of the organizers of the just concluded NNPC/Mobil Track and Field Championship for African Championship and Commonwealth Trials in Calabar, Imoke reasoned that it is difficult for the public sector to develop sports as such the private sector should partner it to succeed, adding that the State has initiated a programme to identify and develop the young ones which it believes in four years time will produce Olympic champions.

Imoke noted that the nation has not done enough to develop athletics despite its enormous endowment and called for a pragmatic approach which will place the country on the same pedestal with its East African counterparts. On infrastructure and facilities, he mentioned that the nation is efficient in hosting international events and after which they allow the infrastructure to decay and that there is need to spend more to overcome the challenge.

The Governor disclosed the State’s preparedness to host the championship in the next four or five years with the support of the National Sports Commission and Athletics Federation of Nigeria (AFN) as it is ready to meet the commitment and will start work to meet the demands of the next edition, advising that the nation should take the development of sports out of the realm of politics.

He explained that the State intends to develop Obudu Mountain to be a high attitude training centre to compliment facilities at the Obudu Mountain Resort and that it is prepared to work with the Federal Government and corporate bodies to make it work, stressing that a new dawn for the development of athletics in Nigeria has arrived while appreciating sponsors and organizers of the championship despite the challenges.

Mr. Elias Gora representing Director-General, National Sports Commission appreciated Cross River for being the first State to host the championship outside Abuja and Lagos and the Government for providing the facilities for a successful outing and commended the State for its remarkable sport development programme and advised that it should keep it up.

Gora assured that the State’s request to host subsequent editions of the championship will be decided when the Commission and AFN meet and advised other States to emulate Cross River.

Mr. Solomon Ogba, President AFN described the Calabar championship as the best, despite the rains, since 1999 and commended the State’s decision to sponsor the championship as well as buy best equipment for the training of its athletes.

Ogba said the championship was an avenue to discover local champions and bring them to lime light and lauded the State’s interest in hosting the next editions and that the choice of Calabar had exposed both athletes and officials to the cleanliness of the city while the dinner was the first to be hosted by a State Government.

REPUTABLE ATHLETES TO BE AWARDED SCHOLARSHIP TO UNIVERSITY LEVEL

Boys and Girls in Cross River State who excel in sporting competitions are to be awarded scholarship to university level as encouragement and appreciation of their prowess.

Governor Liyel Imoke disclosed this while declaring open the five days 1st Cross River State Primary/Secondary Schools Sports Championship at the U.J. Esuene Stadium, Calabar, adding that all those that excel at the championship will be provided with all that will assist them to progress.

According to Imoke, these include scholarships throughout their education, boarding accommodation in schools and facilities to enhance their performance, advising the participants to read and write because the essence of the competition is to encourage those who excel in sports and academic while thanking local government chairmen for ensuring that the preliminary stages of the championship were held in their areas.

The Governor enjoined local government councils to emulate the programme and celebrate those who excel in the championship in their respective areas because when the programme is fully operational it will be one of the best in the nation that will produce great talents of the world.

He disclosed that government is planning with its consultant to initiate a comprehensive sport development in the state and called on all stakeholders to take the championship seriously and make it an annual event starting from inter house competition which is a good take off pad for greater heights, adding that officiating officials should adhere to international recording of time and expectation.

Imoke noted that the championship will not only produce the best but will act as a model and for young talented boys and girls to compete in competitions in Nigeria and beyond, saying that it marked the opening of a sport calendar and the beginning of something great as those who excel will be provided with all that will assist them to progress.

Professor Offiong E. Offiong Commissioner for Education in a good will address, said in 2009, the state participated in the National School Sports Festival in Abeokuta, Ogun State and it won 9 gold, 8 silver and 7 bronze medals and that the Ministry is planning to hold a reception for the victorious contingent for making the state proud.

Offiong added that the Ministry is fully poised to encourage sporting activities in schools so that each student is availed the opportunity of developing his academic and physical talents while calling on the participants to be serious in all events as well as imbibe the spirit of healthy competition and not rivalry as a true spirit of sportsmanship.

Chief Raymond Obeten Commissioner for Youth and Sports in an opening remarks, said in March this year seven world class coaches from the U SA, Jamaica and other countries were brought to the state for a two-week coaching course which provided secondary school games masters with the basic skills needed to discover and train talent in their schools.

The Commissioner said through the process the best would be selected for special training for future representation of the state in national and international competition.