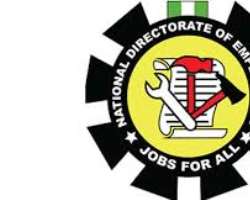 No fewer than 1,130 women and youths of Ebonyi state were empowered under the Micro Enterprises Enhancement Loan Scheme (MEES) of the federal government.

The empowerment was done by NDE National Directorate of Employment In collaboration with the member representing Ezza south/Ikwo federal constituency in the House of Representatives, Hon. Chinedu Ogah, and Chairman Revenue Mobilization, Allocation and Fiscal Commission, Chief Elias Mbam and a woman leader, Princess Tonia Adol-Awam.

Argungu who was represented by the state Coordinator of the NDE, Marcel Igboanude, said the repercussion of mass unemployment if not properly addressed, will adversely affect the overall development objectives of the nation.

“Unemployment has indeed been a serious threat and that is why it features highly on the development agenda of most governments, donor agencies and other development partners across the globe.

“it is apparent that Nigeria as a nation is highly endowed with both human and natural resources. However, unemployment remains one of the various serious challenges mitigating against its march to full development”, he said

The beneficiaries were given N10,000 each as loans with 9% interest rate to start up small businesses which NDE said would make them self reliant and reduce unemployment in the country.