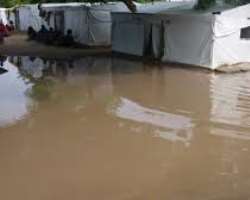 The heavy wind storm and rainfall also rendered many households homeless at the Stadium, Muhammadu Buhari and Kawar Maila IDPs Camps in Maiduguri.

The Manager of Mohammed Goni' Stadium IDPs Camp, Hauwa Njogole while briefing the Chairperson of the State Emergency Management Agency (SEMA), Hajiya Yabawa Kolo, during her assessment visit to the camp on Tuesday, said that no fewer than 2,293 shelters were damaged at the camp due to Friday rainstorm.

Njogole said that the IDPs in 286 shelters were left homeless while others were forced to share overcrowded tents with neighbours or relatives.

Njogole said that the Stadium Camp was established on Feb. 27 , 2019, as a result of influx of IDPs from Baga and Kukawa Local Government Areas, following attacks by insurgents.

She explained further that the camp has 3,574 households; that is accommodating 15,957 individuals, adding that, out of the number, only 2,478 were provided with temporary shelters, while others were managing the existing 200 shelters.

The Camp Manager also said that attacks by the insurgents in Konduga, Auno, Kayamla and its environs had forced another 887 displaced persons to move into the camp.

“This additional numbers of IDPs have been living in the main bowl of the stadium sorroundings without adequate shelters.

“Currently, most part of the camp has been flooded, making life unbearable for the IDPs.

“All the shelters in the camp are either partially damaged or completely damaged, while some areas have become inaccessible due to the flooding.

“About 160 of the shelters have almost been destroyed by tarmites, “Hauwa said.

Also speaking, the Chairman of the Stadium Camp, Modu Kellu-Tujja, told the SEMA Chairperson that there was an emergency need to provide the IDPs with food and non-food items as all their belongings had been destroyed and washed away by the flood.

Kellu-Tujja said that there was the need to construct waterways to redirect the erosion from the rain into the drainage system to safeguard homes of the IDPs.

At Mohammadu Buhari Camp, Magrete John, the Field Officer of Smiling Heart Initiative (SHI) who manages it said that about 260 shelters were completely destroyed by the rain.

John said that 240 of the tents were replaced by an NGO, Action Against Hunger, adding that 1,118 households in the camps are in need of other humanitarian relief supports.

At Kwayar Maila Camp housing 3,330 people, no less than 60 shetlers including latrines were destroyed by the flood. Speaking on the incident, the SEMA Chairperson, Hajiya Yabawa Kolo, attributed the flooding at the camps to the nature of the environment.

She however noted that last year similar thing was experienced at the camp. Kolo equally blamed the destruction of the shelters to the use of substandard materials by the humanitarian actors handling the projects at the camps.

“The qualities of the materials used in building the shelters were far below standard despite the fact that we have what we called the accountability Sector, where all the partners are monitored and evaluated based on projects that were assigned to be executed.

“As you have seen at the Muhammadu Buhari Camp and other camps even some tarpaulins looked more like sacks. Only the visibility is shown all over but when you touch the quality you find out that they are substandard.

“I think the CCM sector managing the camp, especially, the main actors need to check some of their sub- contractors because this quality of work is not coming from the UN system even when you can visibly see UNHCR, Action Against Hunger, IOM paint on the tarpaulin,” Yabawa said.

She however commended the efforts of the state government for inaugurating a high powered committee on flood-related activities to check mate incidents of flood in the state capital.

The SEMA Boss said that the agency will work with the UN and other partners to ensure that drainages are created in the camps. Kolo said that there was the need to educate the camp population on safe hygienic practices as some of the latrines were affected.

She added that IDPs who lost thier belongings due to the flood would be provided with food items and other relief items.

“The Non Food Items, kits will be provided to replenish some of the shelters especially those that were constructed since 2014 at Kawar Maina Camp,” Kolo said.

The SEMA Chairperson also urged humanitarian partners to erect more structures that will accommodate those who lost thier shelters.

Kolo expressed hope that the challenges would soon end as the state government was planning to close all the 23 camps by May 2021, when peace would have fully returned in the state.