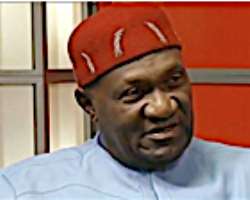 The OYC said the Governor did this by holding an unscheduled meeting with Nwodo after the Igbo leader alongside others had filed a N50bn lawsuit against Buhari.

“Igbo youths wish to put the record straight for Governor Uzodinma to know the implications of empowering an enemy, who from intelligence reports, made allegedly unpleasant comments against President Buhari immediately after meeting with Imo State Governor in Owerri on Monday 6th July, 2020,” a statement signed by President-General of OYC, Mazi Okechukwu Isiguzoro and Mazi Okwu Nnabuike, Secretary-General, said.

“Chief Ogbonnia John Nwodo, is among those that sued and petitioned President Buhari in a N50bn lawsuit before an Abuja High Court and any empowerment is channelled towards destabilizing Buhari government.

“Unknowingly, Hope Uzodinma might have been deceived to start supporting indirectly the litigation against Buhari, where Nwodo and other Southern leaders are demanding N50 billion from Buhari.”

The group accused Nwodo of illegally sidelining two principal officers of Ohanaeze Ndigbo, namely; Deputy President-General, DIG Hillary Opara, rtd, and forcefully conspiring with Igbo leaders in the Peoples Democratic Party, PDP, and victimizing the Secretary-General Ohanaeze Ndigbo, Dim Uche Okwukwu for being in support of the Supreme Court’s judgement that ushered Uzodinma in as Governor.

“Is Uzodinma not aware that Nwodo pro-PDP Ohanaeze Ndigbo kicked against the Supreme Court Judgement in his favour?

“Is Uzodinma not aware that Nwodo and Ihedioha had perfected to install a successor in Ohanaeze Ndigbo who’s a former PDP Governor from Okigwe Zone?

“Is Uzodinma not aware that most protesters in Abuja and Imo State during his swearing-in as Imo Governor had Nwodo’s input?

“Did Nwodo inform APC Governor, Uzodinma about the N50bn lawsuit against President Muhammadu Buhari? If he did, was Nwodo advised to withdraw from among the petitioners?”