How the Nigerian masses have changed 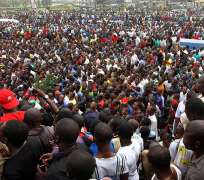 Nigeria, as evidence suggests, should be a super power. While it is true that the world needs to have witnessed the manifest economic prowess of Nigeria and its translucent political vitality, albeit, the docility of the masses is an obstacle. No government is sincerely willing and ready to effect landmark change, except it is compelled by the intimidating presence of the masses, who will accept no excuses from any half-baked leaders. In effect, the masses are the sledgehammers that hit direction and purpose into the leaders.

In the past, the masses were known to determine the tempo and atmosphere of governance. With their activism and apt revolt, leaders at the helms of affairs were compelled to act thoughtfully and meticulously. The masses were unarguably positively ferocious that leaders in their hierarchy would not reach decisions of national significance and consequence, but after due consultations with their representatives at all grass roots levels. Then, I mean in the 1970s and '80s, the fear of the masses was the beginning of wisdom, especially for leaders and representatives of the people who would seek re- election. The masses were the golden seal that stamped the political ambitions of any prospective public office seekers. In modern times, in Nigeria, the masses are not just passive or literally dull, but they give biased emotional support to their leaders. For example, they make excuses for the supposed rulers being just humans and not capable of making an Eldorado out of a nation or out of the sickening economic mess they have inherited. As a matter of fact, some of them make cases for these rulers by citing the colonial experience as the woes of the nation. On several occasions, I have heard friends and socio- political commentators indict the 1914 amalgamation as an everlasting error and a permanent slip, whose impacts are forever. The fighters are now the rationalizers.

Some even believe it is turn by turn , therefore, don't call what you see in the Nigerian system any rot, rather a turn by turn. The citizens from the East would rather want the next leader to simply be an Easterner, while the North will argue the Eastern leaders should not be trusted. The West and the South, too, want their share of the leadership. As long as it is turn by turn, the bad roads may be excused, the job slot may be overlooked, the padding and stealing should be expectedly forgivable. Obviously, arguments and counter arguments are ubiquitous from the new masses. Each one defending the leader or vilifying the rulers in the face of evident gross malfeasance. Those who decide to sit on the fence will rather comment, life is vanity. Thus, the leaders may rob the masses, but should know, life is ephemeral. In the face of such docility, leaders wax stronger in the pursuit of personal happiness at the cost of the public joy. Any nation where the masses are far too divided and passive, the reign of terror is quite sure to continue. Now, the masses have become tools in the hands of their leaders and successful enemies of one another. They develop hot blood when their kinsmen are criticised, even though, they can't deny the substance of the argument that a leadership rebirth is urgent and necessary. The new masses are quick to switch opinions once their kinsmen defect to another party. The same party they have bulldozed, they quickly resurrected and chant its praises. If it continues this way, the masses not the leaders hinder our progress and our collective walk to a superpower status. In sum, We are the masses not the tools, we are common problem sharers and not enemies. Let North, East, West and South realize that we are all Nigerians as such let's fight as Nigerians. Only When we do, we shall win. Remember, impunity at the top is common when those at the bottom are enemies to one another. I may not have had a Northern birth, Southern birth or Eastern birth, but this one thing I know I am not your enemy my friend and you are not mine either. We, both, are problem sharers and solution carriers. United we stand, divided we fall!