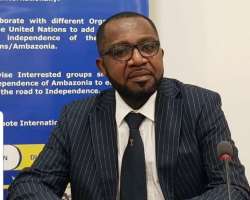 Fellow Ambazonians,
Yesterday, 2nd July 2020, nine of our leaders in detention were invited to meet with a team from the government of La Republique du Cameroun (LRC), on initiating a ceasefire following the United Nation’s request to bring an end to the war in Ambazonia. The genocide in Ambazonia has earned the attention of the United Nations and the international community due to the atrocities committed by the army of La Republique du Cameroun.

As no war has ever been wrapped up in the battlefield, our leaders in attendance were led by President Julius AyukTabe. Real, sustainable peace and independence are a product of the negotiating table. The realization has dawned upon the regime in Yaoundé that the war on our people is counterproductive and a French Cameroun victory is candidly impossible.

The Interim Government of Ambazonia has informed other frontline movements of our struggle about this formal meeting. Despite this meeting being an initial confidence building procedure which is mandatory in all negotiations, our position on a negotiated ceasefire was made clear and unambiguous to the representatives of La Republique du Cameroun. Once significant progress is made, the Interim Government of Ambazonia will update Ambazonians.

The Interim Government of Ambazonia is extremely indebted with the commitment and sacrifice of our ground zero heroes. For over four years, our mothers, fathers and children have been massacred indiscriminately but the resistance from our heroes with limited capital continues to give us hope as a nation. Let me use this opportunity to thank our people in Ambazonia for the sacrifice and commitment they have displayed over the last two weeks in their observation of Lockdowns.