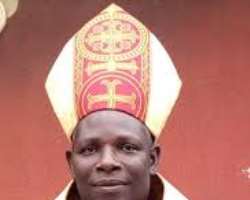 The Lead Bishop of Worldwide Anglican Church (WAC) in West Africa, Bishop Seun Adeoye has lamented that Nigeria is awfully stinking as corrupt practices among public office holders appeared to be on the increase under the present administration of President Muhammadu Buhari.

Besides, the cleric regretted that efforts by some few courageous Nigerians to help in the fight against corruption in the country were not being encouraged as anti-grafts bodies’ activities showed to be slow and selective.

Bishop Adeoye in a statement issued on Sunday, in Okinni, Osun State and titled, “Let’s weep for Nigeria” cited an example of a vital information sent to the Economic and Financial Crimes Commission (EFCC) by a whistleblower on alleged $7.5million fraud involving some individuals working with the Nigeria National Petroleum Corporation (NNPC) while noting that nothing was done on the matter.

The clergyman who doubled as the spokesman of World Bishops’ Council (WBC) in Africa explained further that an organisation he was a member also issued a statement on the said alleged scam but “we are told that nothing can happen to the big men in this corporation”.

“Our group, The Lightbearers issued a statement in support of the whistleblower, Alhaji Ibrahim Farouk, a man of known address, who gave details of how the alleged monumental insurance fraud on the 2020/2021 NNPC insurance renewals was perpetrated.

“Farouk sent his petition directly to the EFCC Chairman, Mr. Ibrahim Magu and explained how the premium for the insurance of corporation for the 2020/2021 was inflated by over 20 percent of the original figure and how the brokers to the business during a meeting held early February this year in London raised objection and pointed out the discrepancy which amounted to about $7.5m (N2.7billion).

“He further stated that the brokers insisted that the action was not right and it was done at the expense of NNPC but back in Nigeria, the insurers and the management of NNPC signed off the documents with the inflated premium.

“As a Nigerian, I am very sad to see how terrible Nigeria situation is. We have millions of our children without education or food on their tables and millions of Nigerians battling extreme poverty on daily basis. Yet, few individuals covet our commonwealth and left majority of others struggling for survival.

“The few corrupt individuals claimed they are powerful. But, I know they cannot defeat all of us. The essence of the Whistleblower’s Law made by the government is to fight corruption. So, I urged the president not to bow and I called on EFCC to without delay treat Farouk’s petition and other petitions before it. I know we can win the war”, Bishop Adeoye added.

While calling on other Nigerians to be bold by coming out to expose those they suspect to be holding Nigeria down, Bishop Adeoye urged President Buhari not to give up in his fight against corruption.