Months Of Unpaid Salaries And Pensions In Imo 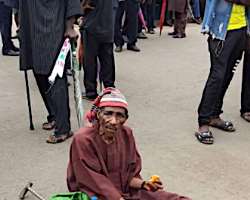 "Over 60% pension payroll is fraudulent. Even pensioners that died 30 years ago are still in the payroll... I swear, if we catch those hired mercenaries again masquerading as pensioners, they will be ruthlessly dealt with... Genuine pensioners will be paid and that will be done after we must have thoroughly interrogated the payroll and successfully removed the fake ones from the list"!

Those were the precise words attributed to the Imo State Commissioner for Foreign/International Affairs, Fabian Ihekweme on the protests by Imo pensioners over their unpaid pensions since January 2020.

Am quoting it because it's over 24 hours since it began trending on the social media without debunk or rebuttal from the named dramatis personnae.

Now, that stretch of very pregnant and weighty statement coming from a key official of the current regime in Imo State reflects the exact attitude of this regime to its refusal to pay pensions vis-a-vis its draconian plans to "deal ruthlessly" with pensioners and their protests.

Nothing could be more self-indicting and self-blackmailing than such inhuman public declaration by the regime. It's really absurd!

First, if the lie that 60% of Imo people on the pension payroll were fraudulent, that leaves a balance of 40% non-fraudulent and genuine pensioners. True or false?

Then, questions arising from that would include the following:

1. If it hasn't concluded its much mouthed deceptive verification, how then did the regime come about the information that 60% of Imo pensioners on the pension payroll are fraudulent? How?

2. Then, how did this regime know that "even pensioners that died 30 years ago are still in the payroll? How? Talk of a necromancer and his necromancy!

3. It does indicate, therefore, that the verification of Imo pensioners has been concluded by this regime, but it doesn't want to pay even the non-fraudulent and genuine pensioners, doesn't it?

4. Since this regime has discovered that 60% of Imo pensioners are fraudulent, why has the regime refused to pay the 40% non-fraudulent and genuine pensioners? Why?

5. Isn't it, therefore, self-contradictory for this regime to threaten to "deal ruthlessly" with the pensioners should they embark on another strike?

6. Could those pensioners participating in the recent protests not count among the 40% non-fraudulent and genuine pensioners?

7. Why then does the regime swear thus: "Genuine pensioners will be paid and that will be done after we must have thoroughly interrogated the payroll and successfully removed the fake ones from the list"!

There are, of course, other questions arising from that very pregnant comment by the Coordinating Commissioner for the current regime in Imo State. But let's suffice with those seven perfect questions above. You may deduce and add your own questions, though!

My final take on this topic, however, is that there's nothing stopping the regime from paying pensions, albeit to the 40% that they claim to have sieved out as non-fraudulent and genuine.

Yet, it's not proven and can't be proven that there are 60% fraudulent names in the pension payroll. For crying out loud, I was a privileged official of the RebuildImo administration that meticulously conducted a very comprehensive biometric verification of Imo pensioners in 2019.

Hence, I stand ready to be controverted that there can't be more than 5% (if up to 1%) permissible scientific error margin in that highly digitalized empirical biometric verification exercise.

The tale of 60% fraudulent pensioners on the pension payroll is at best characteristic hallucinatory propaganda and blackmail of this regime! It should better be disregarded by normal people!

And even if the lie is true that there are 60% fraudulent pensioners, the question remains, why is this regime still searching for "fake ones" to remove, after declaring that the "fake ones" are 60%? Why not remove the 60% "fake" and pay the 40% original?

Let me leave it on inquisitive note. But truth is that freedom of speech isn't same as freedom of sense! The difference is real! This regime must stop playing politics with the pensions and lives of Imo pensioners. There's a Supreme God! Thank you.

By God's grace, Imo State must be rebuilt!