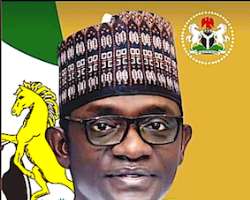 The Yobe Polythene Bag and Woven Sack Company, that was grounded for years has been resuscitated by the Gov. Mai Mala Buni.

The Yobe State Commissioner of Commerce, Industry and Tourism, Alhaji Barma Shettima disclosed this Thursday while inspecting facilities and equipment at the Damaturu site of the company.

He added that with the Intervention of Governor Mai Mala Buni, the company has now resumed full commercial production while expressing satisfaction with the level of operational performance of the resuscitated company.

“I am very much satisfied with the work done on the factory which has the capacity to produce 10,000 bags of woven sacks daily.

“Remember the company is just picking up and there is room for improvement in its production.

“In the near future, the company can produce up to 20,000 pieces This is a promise made and promise fulfilled by the governor,” Shettima said.

The commissioner however commended the governor for his Intervention and efforts towards reviving dormant industries across the state.

According to him, the governor promised in his maiden inaugural speech to restore all the state-owned industries and his intervention has reached other companies like Flour Mills Company, and Yobe Sahel Aluminium Company.

He also said the governor further approved for the release of funds for the resuscitation of Pole Production Company in Damaturu while expressing hope that the company would meet customers’ demand in the state and beyond.

The General Manager of the company, Alhaji Shu’aibu Gadaka, said that the company has adequate manpower and sufficient raw materials to operate smoothly.

He said that the management has made all the necessary contacts towards marketing the products of the company to improve the Internally Generated Revenue (IGR) of the state.