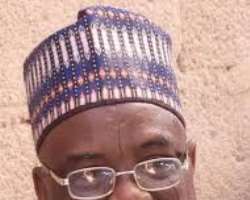 His Excellency Gov. Mai Mala Buni, Executive Governor of Yobe state commiserates with the government and people of Borno state over the death of Dr. Babagana Wakil mni, Chief of staff to Governor Babagana Umara Zulum.

A statement issued Wednesday by Mamman Mohammed, the Director General , Press and Media Affairs to Gov. Mai Mala Buni said that Governor Buni described the death of the late Chief of staff as a painful loss to Governor Zulum, the Government and People of Borno and Yobe states.

According to Buni, Borno and Yobe states still remain one people "every misfortune that affect one, affects the other" he said.

He also described the deceased as a complete gentleman who lived a life of service to humanity.

The governor prayed almighty Allah to forgive his shortcomings and grant him eternal rest in Aljannatur Firdaus.

Gov. Buni also prayed that Allah grant his family, government and the people of Borno state the fortitude to bear the irreparable loss.