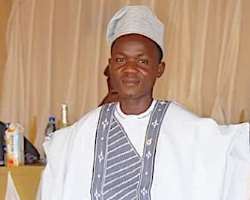 The President of Rotaract Club of Iwo, Ishola Shuaib Ejiwale has died after he was hit with a diabolical ring.

The Nigerian Voice gathered that he was hit with the ring by one of his friends, Ahmed Lateef after playing football together at St. Mary’s Grammar School, Iwo,

Eyewitnesses said Shuaib and Lateef had minor argument during the game and fought. It was gathered that Lateef hit him with the diabolical ring and he slumped and died.

An eyewitness told The Nigerian Voice that Lateef confessed that the ring on his hand was diabolical and that he forgot to keep it at home when he was going to the field to play with his friends.

The late Shuaib studied Building Technology at the Federal Polytechnic, Ede and graduated in 2016.

It was learnt that Shuaib is the first son of his father who is a surveyor in Iwo. The father has been sick for sometime.

The Police Public Relations Officer in the state, DSP Yemisi Opalola said the suspect has been arrested.