No Faction, No Cracks In Imo APC, Says SWC 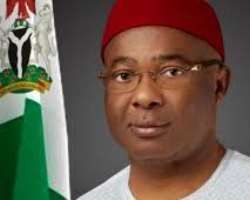 The Nigerian Voice gathers that the meeting was convened to review some recent happenings in the party and the just concluded APC NEC meeting held at the presidential Vila on Thursday 25th June 2020 which resolved the the National Working Committee stands dissolved and a Caretaker/Convention Committee set up to handle activities of the party till her next convention.

Chief Marcellinus Nlemigbo, the Caretaker Chairman of the State Working Committee, SWC of the party who presided over the meeting having attended the NEC meeting in Abuja, informed his executives about the developments in the party.

The release read that; "The Imo APC remains one strong and united family as ably led by Prince Marcellinus Nlemigbo Esq. That there is no faction and no other executive of APC in Imo State. That the SWC takes serious exception to Congratulatory messages and press releases issued by some phoney and faceless individuals purporting to be Chairman and members of Executive of Imo APC. That Imo APC party faithful and entire people of Imo state should note that these are not APC members and should be disregarded as imposters."

Continuing, the reads that;" Imo APC and people should be reminded of the activities of this group and their leader the former Governor of Imo state, Rochas Okorocha, when they nearly drowned and killed APC in Imo state. They applied brut force and Imo state finances to support and work for Action Alliance (AA) Party and candidate during the 2019 and 9th March, 2019 elections. Till date, they have not attempted to return and they have not been readmitted into APC."

"That as a chapter of APC and disciplined committee (SWC), we shall show undiluted and total to the President, Federal Republic of Nigeria, His Excellency, President Muhammadu Buhari. In this regard, we pledge total allegiance to the authority of the APC NATIONAL CARETAKER COMMITTEE AND SPECIAL CONVENTION COMMITTEE LED BY HIS EXCELLENCY, GOVERNOR BUNI.

Finally, it is the resolve of the Imo APC SWC to continue to work in synergy with the state Executive Council led by His Excellency, Distinguished Senator Hope Uzodinma (ONWA OMO) to achieve the desired SHARED PROSPERITY in Imo state." the statement read.

In another development, the Mbaitolu Local Government Area Chapter of the All Progressives Congress in the state has disowned one Mr. Dan Nwafor who has before now been claimed to be the Chairman of the party in the state stating that he is yet to rejoin the party after his expulsion due to anti - party activities in the build up of the 2019 general election. This was resolved in a meeting of the LG Executive of the party and other stakeholders who duly signed a resolution to that effect.