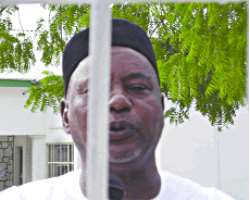 The reinstated Deputy Governor of Bauchi State, Mohammed Garba Gadi resumed office on Monday at about 7a.m. following the declaration of a Bauchi State High Court, presided over by Justice Haruna Tsanmani.

Gadi arrived at the gate of his office at 7a.m. prompt in a brown Toyota Camry saloon car with securitymen and drove into the premises of the Deputy Governor's office.

However, he could not gain access into the main office as it was under lock.

He decided to stay in the waiting lounge pending when he would gain entry into the office he once occupied before he was impeached by the State House of Assembly following allegations of gross misconduct.

He was escorted to the office by supporters who were not allowed to enter the office with him.

Gadi spoke to journalists across the fence of the office as security operatives did not allow newsmen to enter the premises.

'I'm right now in the office and will do my duties as provided for, in the Constitution of the Federal Republic of Nigeria.

'Yes my security has been restored because the state police command has given me security cover.'

But in a swift reaction, the State Police Commissioner, Danlami Yar'Adua denied Gadi's claim. He said: 'I did not provide him police escort to his  office. What was provided for him was police protection when he petitioned us that his life was in danger. We made available two uniformed men to guard his house. How they escorted to him to the office this morning remains a surprise to me.'

The police boss  explained further that he was not in town when the incident took place, saying, 'I was at the Force  Headquarters in Abuja to brief my IGP on the situation on the ground. I took along the court order as well as the notice of appeal filed by the government for proper legal advice from the legal department of the Force. So it is not true that  we provided him escort. But when he (Gadi) told me that his life was in danger, I directed that two policemen should go and guard his house.'

On the fate  of the policemen who escorted the reinstated deputy governor to  office without clearance, the state police boss said, 'as soon as I am back, we will investigate to ascertain the role played by all those involved in the matter  after which appropriate measures will be taken against them. We operate a lawful force which is guided by rules and regulations.'

In its reaction, the state government described the development as most unfortunate. The government saw it as a calculated attempt to cause unnecessary tension in the state, assuring that it would do everything within constitutional powers to protect lives and property of innocent citizens of the state.

Speaking on behalf of government, the Senior Special Assistant to the Governor on Media Affairs, Sanusi Mohammed said in a telephone interview, 'the fact of the matter is that government, dissatisfied with the judgment, had filed an appeal at the Court of Appeal, Jos and served same on the respondents. We have also filed a motion on notice for stay of the execution of the judgment.

However, the reinstated deputy governor had called on Governor Isa Yuguda and his government to respect the rule of law and allow matters to rest.

On the issue that he was taking a risk of his life by going to the office considering the tension the judgment had generated since it was delivered, he said: 'Yes I am taking a risk and am ready to sacrifice my life.

'I will take even a bigger risk for my supporters who have stood by me all along. This victory is not for me but for democracy and for Nigerians who hate injustice.

He, therefore, called on his supporters, particularly, members of the opposition ANPP not to do anything that would jeopardize their victory but to remain law-abiding citizens who would respect the rule of law and act according to it.

According to Garba Gadi, his coming back to office was an act of Allah.

Meanwhile, it took the prompt intervention of the armed mobile policemen who stormed the Deputy Governor's office to stop some irate political thugs from burning down the building.

When contacted on phone, the incumbent Deputy Governor, Babayo Garba Gamawa was said to be holding a crucial meeting with Governor Isa Yuguda at an undisclosed location within Bauchi.

According to him, 'Gadi does not have the power to resume office by himself. It was the same authority that reinstated him that should provide him Sheriff to take him to office. However, that could not be done since there was an appeal in Jos, so the status quo should be maintained.'

It would be recalled that the High Court in Bauchi ordered the reinstatement of Garba Gadi last Friday, but the state government went to the Court of Appeal in Jos to seek for stay of execution of the judgment so that the status quo will be maintained pending the determination of the appeal.