Ojudu is a blackmailer, Ekiti PDP not ready to make any gain from any political opportunist - Fayose 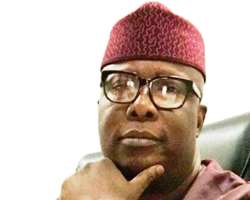 Former Governor of Ekiti State, Mr. Ayodele Fayose has said that the People's Democratic Party (PDP) in the State was not interested in making any gain from the ongoing political feud between Governor Kayode Fayemi and Special Adviser to the President on Political Matters, Senator Babafemi Ojudu.

Ojudu, who is having a running battle with the State Governor, Dr. Kayode Fayemi, over the control of the All Progressives Congress (APC) in Ekiti State had reportedly said on a radio station on Saturday that; "If I die and they put PDP flag on my coffin I will wake up, tear it and go back to sleep."

Responding, Fayose who spoke through his Media Aide, Lere Olayinka, likened the ruling APC to a "left hand used to clean asshole," saying; "Ojudu has no hand at all. He should not even be referred to as politician."

The former governor described Senator Ojudu as a political opportunist, who is always fighting for his own selfish gains,

saying; "He fought against Niyi Adebayo, myself, Segun Oni and he is fighting Fayemi now. Who will please him in Ekiti?"

He disclosed that Ojudu was the one who sew the dress that he used for his inauguration as governor in 2003, adding that "the moment he realised that he won't be able to control my government then, he went into full-time blackmail, using his TheNews magazine and PM News."

Speaking further, the former governor said; "Ojudu was the arrowhead of the people who went to the likes of Baba Afe Babalola to lie against me then.

"He is political opportunist, a senator by accident, who is always striving to destroy any government in which he can't have his way.

"Therefore, he can continue with his usual voyage of political blackmail, that is his business and that of his Coronavirus infected APC party.

"As for us in the PDP, we are not interested in making any gain from the reckless political life of a man who does nothing other than to destroy the good works of others."