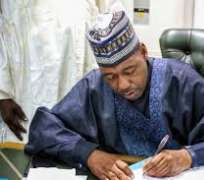 The Borno State Government has in the course of it's socio economic reforms of government structures in the last one year established 6 reform agencies to effectively and efifciently enhance and implement the state government policies, programmes as well as projects.

” During the period under review, the state government has also Constituted a Committee on Civil Service Reform so that some of the systemic challenges and institutional inadequacies both structural and instutional be addressed Civil service is dynamic and we must make changes to meet the changing trend of governance", Shuwa said.

The SSG further explained that the state government has had agreement with Cameroon, Niger and and Chad Republic when the governor visited them with a view to bring back over 250,000 Nigerian Refugees, from Borno state and other neighbouring states of the north east where already 2, 000 refugees from Cameroon have arrived Banki border town in Borno state and we are discussing with the Nigerian Refugees Commission and Nigerian Air Force to repatriate others also back to their ancestral homes in Nigeria”

He said: "We have written letters to the Shehu’s of Bama and Dikwa, as well as the Emirs of Gwoza, Askira to relocate back to their communities for full restoration of civil authority and they are now all in their domains with their traditional district and village heads às well as tittle holders on the issue of return of IDPs and restoration of civil authority at the 27 LGAs of the state, Shuwa said.

He said that within the last one year, the state government has also employed 150 medical doctors, 120 administrative staff and 5 professionals to fill the vacancies created by the retirement of workers in the civil service but also has to be incorporated in the budget