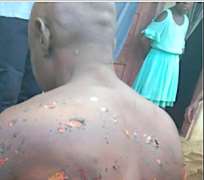 The gloomy news of how a Senior Special Assistant to Governor Ben Ayade of Cross River State, Nigeria Mr. Thomas Obi Tawo (a.k.a General Iron) hired cult boys and hoodlums to bundle elderly men and women in his hometown of Boki Local Government Area, beat them up with sticks and rods, then steam machetes in fire, use and scald them on their bodies while tying them with ropes on stakes over his malaria dream that these poor, and hapless elderly people were fighting him while asleep in a vision is not only sickening but horrifying. The elderly men and women were put through this horrendous attack to extract confessions for what they don’t even understand. And some of them who attempted to escape the callous and barbaric treatment were further mangled. This is how a lot have been dragged to an unknown destination in the forest and their whereabouts remain a mystery.

This is beyond comprehension, and we strongly condemn this devilish act in no uncertain terms. We call on Governor Ben Ayade to immediately fire Mr. Thomas Obi Tawo from his administration.

The Inspector General of Police is also by this release called upon to arrest Mr. Tawo and investigate him for assault, battery and possible homicide. Recently, there’s been a spike in torture and killing of old men and women as well as children across the country, especially Cross River State, after stereotyping them as witches and wizards. This has been fueled by mendacious religious preaching churned out by pulpit theologians who have run out of ideas and mastery to maintain their steam of popularity, exploitation and extortionist gambit. Sam Ikpe ItaumaUnfortunately, due to ignorance and unfounded fears, stigmatized men and women including children hardly have people who speak out or stand up for them. I hereby charge civil society organizations to rise up to the occasion and defend the right of people stereotyped on the grounds of witchcraft accusations.