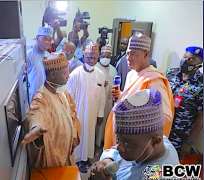 The visits were part of 10 days lined up media activities to mark one year anniversary of the Governor where he met with the management and staff of federal and state broadcast houses and showed compassion with the junior workers of the media houses.

The governor however expressed profound gratitude for the overwhelming support his administration has been receiving from NTA and BRTV amongst other Media houses in the state.

He was also conducted round the media facilities and later fielded some questions in a short time interviews at the NTA and BRTV stations.

The governor reiterated his commitment to tackle the security challenges in the state with th support and cooperation of the people and security agents as well as the vigilante CJTF and hunters.

He said: "In the last one year, we have procured over 300 surveillance vehicles which were already distributed to the Nigerian armed forces, CJTF and Vigilante hunters who are in the fight against the Boko Haram insurgents.

“We are making sure that we sustained the fight against all forms of criminality, be it terrorism or other nefarious activities in the state. We have enhanced the internal security mechanism as well.

“To address the root cause of the insurgency, we have rolled out social protection policies and programmes. We have banned political thuggery and other forms of social vices.”

“Security remains one of the cardinals objective of any Government, to this end, we established the Security Trust Fund, increased the allowance of our volunteers and build their resilience to compliment the armed forces in the war against insurgency in the state," Zulum said.

The Governor further explained that his administration will equally focus on food security, education, healthcare delivery, infrastructure and support small and medium enterprises (SMEs) as part of his administration 10 point agenda.

He also assured that his Government will continue to do everything possible within the little resources the state has to protect the lives and property of the people while ensurung that he adminstration will also continue to provide qualitative education, improved livelihoods for the IDPs, adequate healthcare services delivery at all the nooks and crannies of the state, basic infrastructural facilities like roads and drainage systems as well as youths and women empowerment.

The governor however appealed to the people to continue to pray for peace in the state while reaffirming his resolve to ensure transparency, Accountability and good governance in steering the affairs of the state.